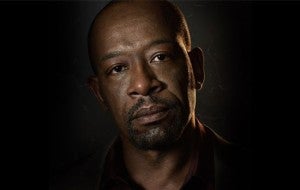 In a new AMC video, Lennie James takes a look back as his time on The Walking Dead as well as a look forward at his upcoming role in Low Winter Sun. In regards to his return on Season 3 of The Walking Dead, Lennie James said, "There was a lot of secrecy around the filming of it. There were lots of places that I wasn't allowed to go. And when we were on set, there was a lot of effort put into making sure that no one got any surreptitious photographs."

In Low Winter Sun, Lennie James plays Joe Geddes. Set in Detroit, Low Winter Sun is a contemporary story of murder, deception, revenge and corruption in a world where the line between cops and criminals is blurred. Low Winter Sun begins with an act of retribution -- the murder of a dirty cop by two fellow Detroit detectives, Frank Agnew (Strong) and Joe Geddes (James). Seemingly the perfect crime, in reality the murder activates forces that will forever alter Agnew’s life, and pull him into the heart of the Detroit underworld.

The series is based on the 2006 award-winning British two-part mini-series of the same name written by Simon Donald and produced by Tiger Aspect Productions (an Endemol Company). In addition to Mundy, Jeremy Gold, head of creative affairs for Endemol Studios, oversees the project with Greg Brenman, head of drama for Tiger Aspect.