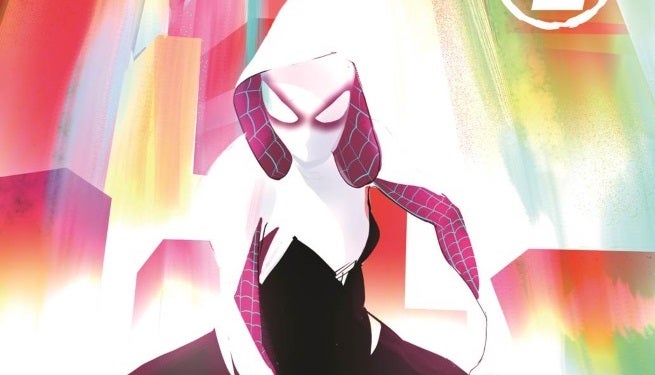 When Gwen Stacy, Spider-Woman (better known as Spider-Gwen) debuted in Edge of Spider-Verse #2, I ended my review by essentially begging for an ongoing series. It's all here. There was comics magic in that one-shot story connected to Dan Slott's epic "Spider-Verse". Jason Latour, Robbi Rodriguez, and Rico Renzi took the essential elements of the Spider-Man mythos and spun them into something truly fresh. Gwen Stacy and her world may have felt familiar, but the core of their characters and story was new. Edge of Spider-Verse #2 captured lightning in a bottle, and Spider-Gwen #1 shows that lightning can strike twice.

Spider-Gwen #1 functions as both a first and a second issue. The number on the cover and marketing all pose it as the beginning of a series, but it's connection to the events of "Spider-Verse" are undeniable. Not only was her origin introduced, but she revealed her identity to her father Captain Stacy and disappeared from her world in comics preceding this one. A lot has happened and Spider-Gwen #1 begins in media res, focusing on the momentum built over the past few months instead of slowing down for excessive exposition and recaps. At one point Gwen refers to "fighting in a war for all reality" and the editor's note below is simply a caption of Spider-Gwen editor Nick Lowe shouting, "See Spider-Veeeeeeerse." It's a good decision.

What defines Spider-Gwen most to me is the propulsive feeling of the book. It's all about movement and action, both literally and metaphorically. Gwen is a young woman on the run. Not only is she being chased by police, but she's trying to make a life for herself just as it seems to be falling apart. She been kicked out of her band The Mary Janes, and she isn't sure where she stands with any of her family or friends. Life is moving fast for Gwen and she's barely keeping one foot ahead of the crumbling bridge behind her.

The velocity at which her life appears to move is significantly enhanced by the work of Rodriguez and Renzi. Their instincts for superhero storytelling are undeniable. Each panel is crafted to speed the story along, never giving the reader or any of the characters much of a break. Drawing a back alley brawl, the revelation of a new character, or an investigative sequence, Rodriguez does not waste an iota of space. Every panel serves a purpose.

All of that is apparent from the very first action sequence featuring Gwen facing off against the Bodega Bandit (who is definitely the worst arch-nemesis ever). The fight takes no more than six panels from beginning to end, but it's a great exercise in choreography that highlights both Gwen's fighting style and attitude. She's loose and limber in each moment of the sequence dropping from a fire escape to the cement below comfortably. The fight doesn't play to her super-strength, but to her skill and grace as she throws her opponent through the air into a distant dumpster. It is the work of a judo master on steroids, moving as smoothly and powerfully as a tidal wave. Each action is highlighted by onomatopoeia that mimics the size and effect of the action, continuing to highlight the significance of sound and music to the character. The efficiency and casualness of this sequence speaks volumes about Gwen. Nobody has to tell you who she is when she dons her mask as Spider-Woman; it's all there in her actions.

Rodriguez's eye for detail helps to maintain momentum in smaller moments. The hood of Gwen's costume is used to great effect in displaying motion. As she swings across the city, it kicks out behind her giving readers a sense of the speed at which Gwen is moving through the air. Even in the quietest of scenes, a hushed conversation taking place in a hospital room, Rodriguez discovers the tension and action beneath the surface. Body and facial language are used to great effect transforming what could have been a passable moment of exposition into something exciting.

Rodriguez doesn't just accentuate the movement of fights and chases, he makes music and sound come to life in the same way. Renzi takes the big, bold lettering and instills it with neon emotion, plucking just the right colors from his arsenal to highlight how each moment should feel. Whether it's the lyrics of The Mary Janes or a jailhouse interrogation, sounds fill the page with energy. In the case of the former it's a frantic, exciting punk rock vibe in hot pink, and in the latter it's a loud, ugly repetition in blue.

Latour's script for the first issue is every bit as packed with action and energy as the art is. He walks the line between continuing the story from Edge of Spider-Verse #2 and debuting a new ongoing series perfectly. Part of the fun of Spider-Man stories in the past has always been the massive supporting cast of characters, and Latour does not hesitate to introduce his own. A bevy of familiar faces appear in Spider-Gwen #1, each with their own unique twist. In the same way that this version of Gwen Stacy feels both familiar and entirely fresh, so do many other classic Marvel heroes and villains.

The most fascinating reinvention in this issue is that of Adrian Toomes better known as The Vulture. He's a creepier more twisted version of the one Spider-Man typically fights, but what is most interesting about the character is the sub-text Latour includes. Toomes is a vain man, angered by the attention given to Spider-Woman by J. Jonah Jameson and the NYPD. An old, white man angered by the appearance of a young woman in Marvel Comics certainly mirrors reality in some ways. This makes Spider-Woman's confrontation with the Vulture all the more enjoyable, especially given the manner in which she lures him into revealing himself.

It doesn't matter how much The Vulture wants attention though because this comic and the hearts of its readers belong to only one person: Gwen Stacy, Spider-Woman. Edge of Spider-Verse #2 revealed an exciting new vision, and Spider-Gwen #1 is all the reassurance anyone should need that it was not a one-time fluke. Spider-Gwen is a fresh take on classic ideas, featuring some of the best art and writing in superhero comics today.

I've said it before and I'll say it again: Face it Marvel, you hit the jackpot.