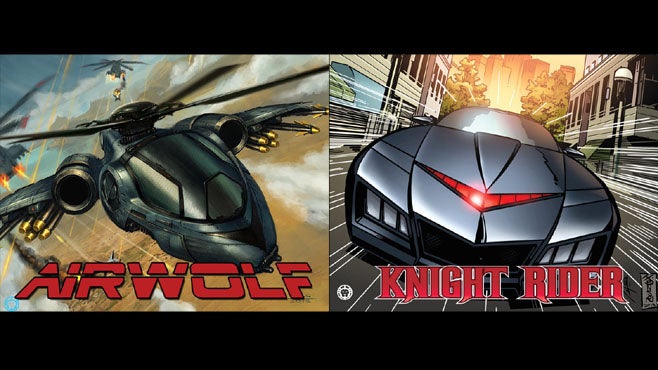 Lion Forge Comics and IDW Publishing today announced a partnership to bring Lion Forge's digital comics, including some based on classic NBC television properties, to print through IDW.

Lion Forge is kicking off its print collection with two of its notable licensed titles, Airwolf and Knight Rider, based on the classic NBC Universal television series. The publisher also will release its original series, Rampage Jackson: Street Soldier, inspired by MMA fighter, Quinton "Rampage" Jackson.

Lion Forge and IDW will publish and distribute print trades of Lion Forge's other original and licensed collections as well, including titles from their all-ages and young adult imprint, ROAR Comics, as current digital versions are completed.

"We are excited to be entering this creative endeavor with IDW, a company we feel is on the forefront of progressive publishing," said Lion Forge CEO David Steward II. "With IDW's experience and reputation for innovation, this partnership will exponentially increase Lion Forge's potential to explore new and unique avenues for our content."

"Lion Forge has made a name for itself in the world of digital comics," said IDW President Greg Goldstein. "Their dynamic library offers readers everything from a super powered Rampage Jackson to reboots based on iconic '80s television shows. We welcome the opportunity to showcase daring and talented publishers such as Lion Forge to our increasing audience by offering print versions of their digital books."