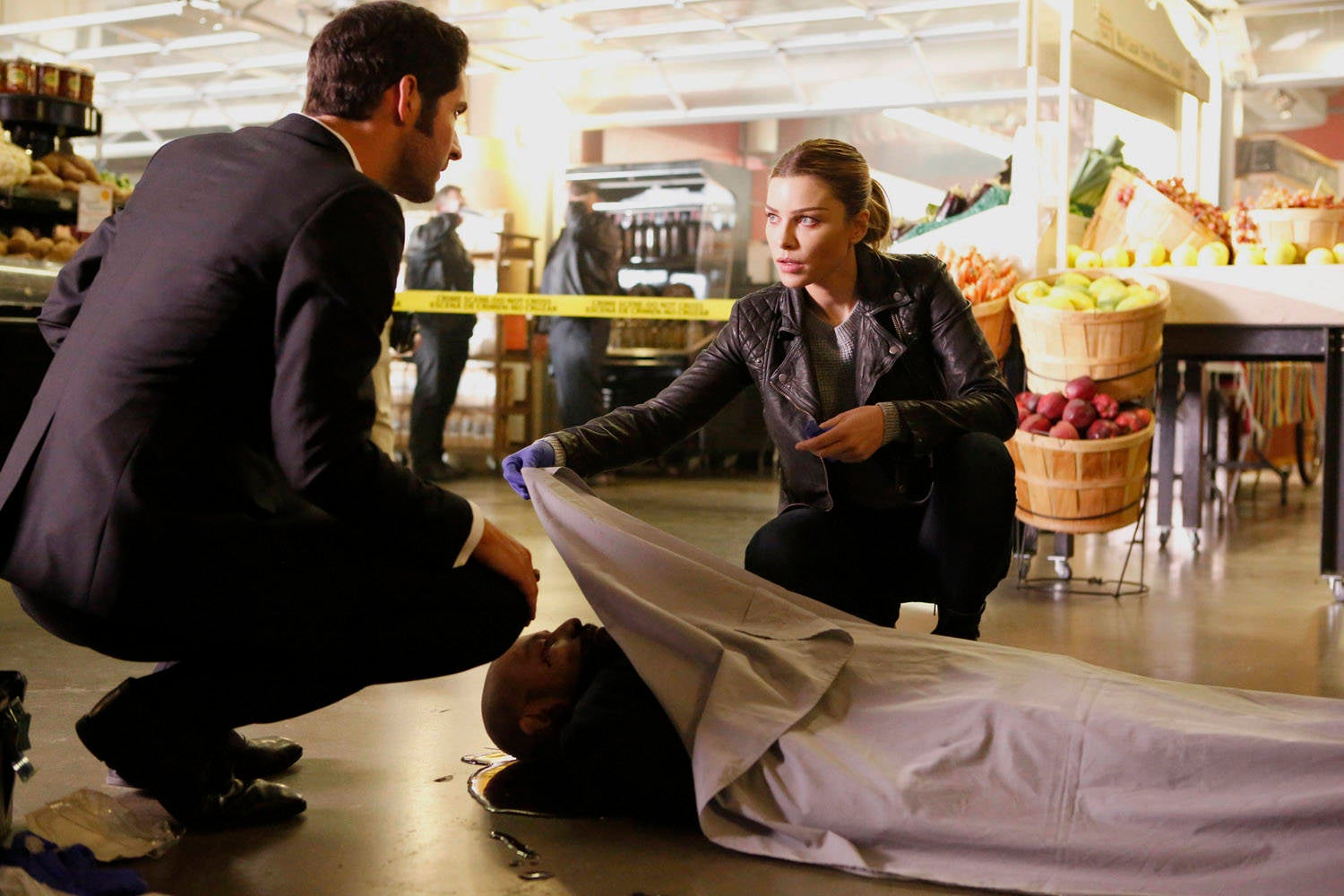 The episode begins at the scene of a crime: a grocery store, where a famed chef dropped dead after apparently being poisoned. Lucifer (Tom Ellis) is particularly disappointed, as a huge fan of the chef's tamales. Timing indicates that he was likely poisoned at his own restaurant, but all of his employees saw him as a father figure, even referring to him lovingly as "Pops." Chloe decides that they need to investigate every employee anyway, but they are soon interrupted by the unexpected appearance of Chloe's mother, Penelope, who invites Chloe (Lauren German) and Lucifer to join her for dinner, later that night.

Upon questioning the staff, they learn that the chef was extremely demanding and prone to throwing things – yet they still loved him. His son, Junior, on the other hand, had more complaints about the man. Lucifer uses his power to learn that all Junior wanted to do was get along with his father, though he did mysteriously show up in town again just before he died. Then they question the restaurant's sous chef, Anne, who stands to inherit the restaurant, but her only desire was to become a better chef than him. Suddenly, she becomes ill and vomits blood – all over Lucifer.

Meanwhile, Mazikeen (Lesley-Ann Brandt) has her first appointment with Dr. Linda (Rachael Harris). She wants to be more "normal" and fit in better, on Earth. When Linda suggests that Maze embrace her surroundings and make friends, Maze storms out. Nearby, Dan (Kevin Alejandro) and Malcolm chat in their police car while on patrol. Malcolm (Kevin Rankin) tells Dan that he plans to kill Lucifer, but won't tell him why.

Back at the restaurant, medics take the sick chef away, with Chloe assuming that she was also poisoned. Dan joins the investigation, offering up a fired staff member as a potential suspect, and Chloe invites him to the upcoming family dinner. She and Lucifer then make their way to the new suspect's home. They initially break in, but the girl says that all she wanted to do was make peace with Chef Javier. After their conversation, Lucifer is more convinced than ever that the chef's son, Junior, killed him. 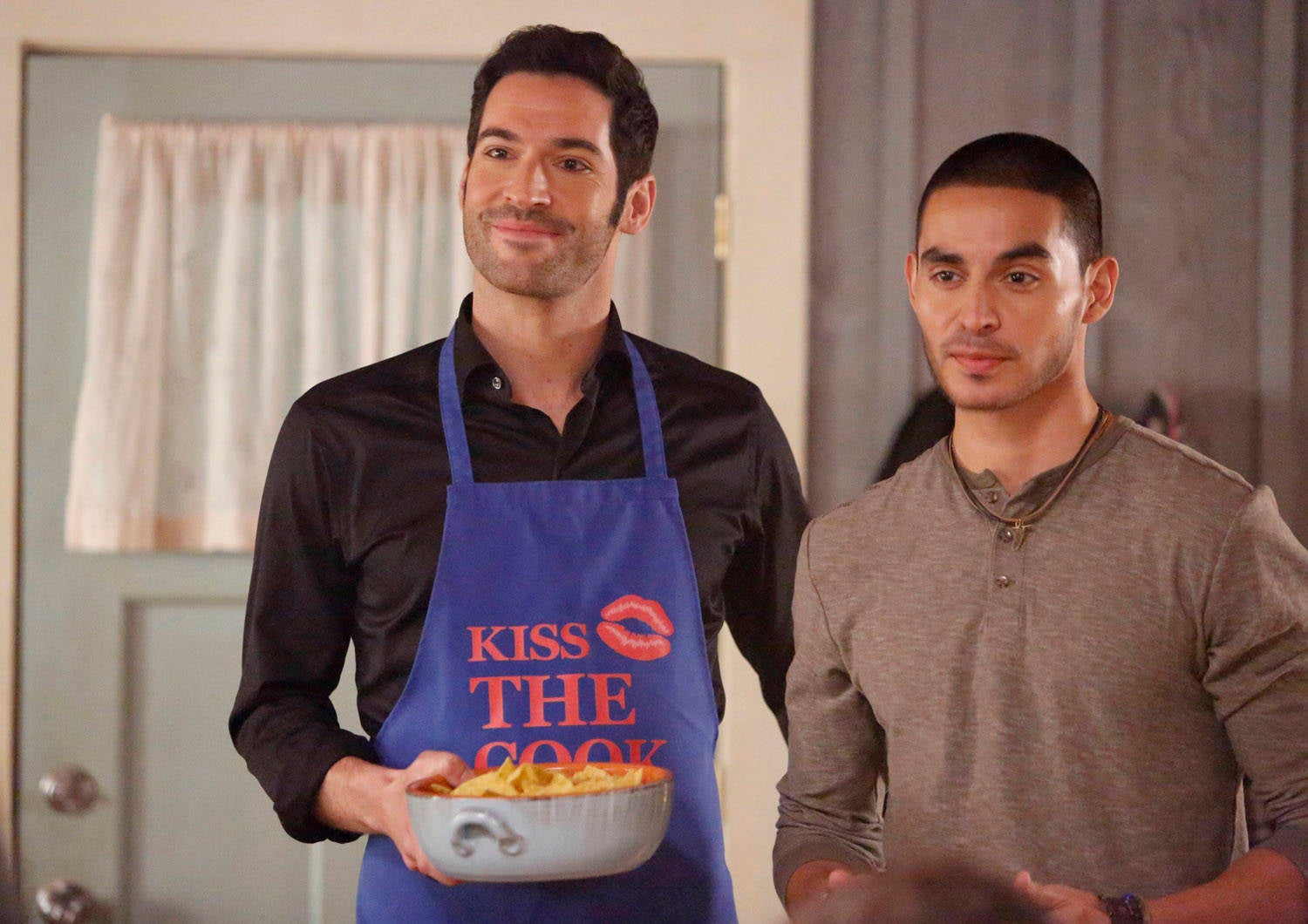 Then, Chloe gets a call from her daughter's babysitter and quickly speeds back home. She finds her mother, Penelope, setting up Trixie for an audition, making Chloe furious. While they argue, Trixie disappears and somehow makes her way to Lux. She tells Maze that she doesn't like when people fight over her. The two of them become friends, before Chloe shows up and takes Trixie home.

Lucifer waits at Junior's home to catch him when he gets back, but he's disappointed to learn that Junior definitely didn't kill his father, based on Lucifer's powers of deduction. Afterwards, Lucifer brings Junior to Chloe's house, where they make dinner for Chloe and her family. Of course, as they sit around the table, Chloe is nervous that Junior has poisoned their food. The family begins to bicker, inspiring Junior to reminisce about his father. His touching speech convinces Chloe of his innocence, but Dan takes him down to the station, anyway.

Chloe changes her attention to Anne, who they figure may have been upset that Junior came home, got on good terms with her father, and could have inherited the restaurant instead of her. They find her at the restaurant and accuse her of attempting to kill Junior – though Javier accidentally ate the poisoned food instead, killing him. She swiftly lights the kitchen, and thus the entire building, on fire and escapes. Lucifer picks up Chloe and carries her out, heroically, getting pretty burned in the process. Luckily, she snagged the proof that Anne used to poison Javier on the way out.

Outside, the watch the burning restaurant, and Chloe tells Junior that he was set to get the restaurant from his father. At the same time, Maze visits Linda again to tell her that she made a friend, albeit an 8-year-old girl. Chloe returns home to find that her mother is leaving early, and they reconcile. Then, Dan meets up with Malcolm again and decides to arrest him, but Malcolm overpowers him and ends up giving Dan a serious beating before leaving him unconscious. He then picks up Dan's cell phone, and breaks up with Chloe, via text.

The episode ends when Chloe surprises Lucifer by showing up at Lux, already drunk, after getting the text from Dan's phone. Lucifer consoles Chloe, and she tries to kiss him. Shockingly - Lucifer stops her, in a moment more "human" than ever, and Chloe suddenly realizes how drunk she is. And then, Chloe falls alseep right on Lucifer's shoulder.