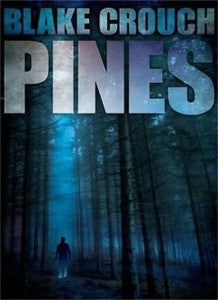 In announcing their new Fall schedule this morning, FOX also announced a new series for 2014. "Wayward Pines" is based on the novel "Pines" by Blake Crouch, and is being directed by M. Night Shyamalan. FOX also compares the feel of the series to "Twin Peaks." Here's the full description from FOX. "Imagine the perfect American town... beautiful homes, manicured lawns, children playing safely in the streets. Now imagine never being able to leave. You have no communication with the outside world. You think you're going insane. You must be in Wayward Pines. Based on the best-selling novel "Pines" by Blake Crouch and brought to life by suspenseful storyteller M. Night Shyamalan ("The Sixth Sense," "Signs"), WAYWARD PINES is the intense new mind-bending event thriller evocative of the classic cult hit "Twin Peaks." Secret Service Agent ETHAN BURKE (Academy Award nominee Matt Dillon, "Crash," "City of Ghosts") drives to the bucolic town of Wayward Pines, ID, to find two missing federal agents. Ethan was the logical choice for the mission. He's one of the best Secret Service agents in the Seattle office. He's also the man who knew missing agent KATE HEWSON better than anyone. They were partners. They were more than that. Their relationship nearly destroyed Ethan's marriage. Kate transferred to Boise and Ethan thought he'd never see her again. Now, Kate and her new Secret Service partner, BILL EVANS, are nowhere to be found. But just as Ethan spots the sign that says "Welcome to Wayward Pines, Where Paradise is Home!," a truck slams into his car. When Ethan wakes up in the Wayward Pines Hospital, he remembers his name, his address in Seattle and the accident on the outskirts of town. He knows he's a Secret Service Agent who came to Wayward Pines to investigate the disappearance of two agents. What he can't figure out is what's wrong with this eerily perfect little town. None of the phones work. He can't get through to his wife back home or his boss at the Secret Service. His wallet, ID, money, phone…everything is gone. And no one will help him. Back home in Seattle, Ethan's wife, THERESA, gets a call from Ethan's boss at the Secret Service, ADAM HASSLER. Ethan is missing. No other information is available until early testing shows that Ethan was never in his car that was recovered on the side of the road outside of Wayward Pines. They're still investigating. This isn't enough for Theresa. Along with their teenage son, BEN, Theresa sets out on her own search for Ethan. The mystery only deepens as Ethan employs his intelligence and tireless determination to solve the mystery of this unsettling town. Challenged at every turn by the town's die-hard residents, Ethan's investigation only turns up more questions, the most important of which is: What's wrong with Wayward Pines?" WAYWARD PINES is a production of FX Productions. The series is created and written by Chad Hodge ("The Playboy Club," "Runaway") and executive-produced by Shyamalan, Hodge, Donald De Line ("Green Lantern," "The Italian Job") and Ashwin Rajan ("After Earth"). Wayward Pines will premiere in 2014, but FOX has not announced what day and time it will air.