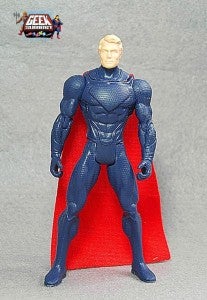 An incomplete action figure from the upcoming Man of Steel toy line seems to have been secreted out of the Mattel manufacturing plant in China and has ended up on eBay, according to a report at Comic Book Movie.

The figure, pictured at left, is partially painted but features no detailing; still, it gives a sense for the look, texture and attention to detail of the upcoming line.

It may be interesting to see whether the body itself will be used for more than just Superman, since set photos taken of General Zod appear to show the villain wearing a similar chestplate with a different logo on it. That could explain why the "S" on the Superman logo is not carved into the shield in relief.

The toys are expected to hit stores in late spring, just ahead of Man of Steel's June release.