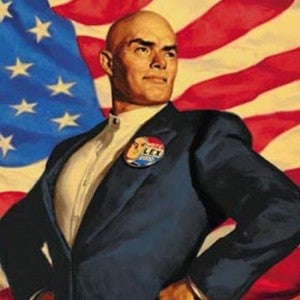 Here is one of those rumors that sounds so made-up that it just might be true. We've been following the possibility of Lex Luthor making an appearance in the upcoming Man of Steel movie. A couple months ago, most people thought Lex Luthor popping up in Man of Steel was about as likely as Christian Bale showing up as Bruce Wayne to have coffee with Clark Kent.

However, after early screenings, there were rumors that Lex Luthor was at least mentioned in Man of Steel. Then, writer David S. Goyer dropped a bombshell when he responded to a question about why Lex Luthor wasn't in the movie by basically replying that no one has ever confirmed that he's not in the movie.

Now, the usually reliable and well-respected Ain't It Cool News is reporting that they have been told by a source that Lex Luthor isn't just mentioned in the Man of Steel but that he actually appears in a major role in the movie. In fact, and this is where it gets really unbelievable, they even know which actor is playing Lex Luthor, and he's a former Smallville actor.

According to Ain't It Cool News, Lex Luthor will be portrayed as ambitious, ego driven and cold by actor Mackenzie Gray. Yes, the same Mackenzie Gray who played a Lex Luthor clone in Smallville. There is also a video where MacKenzie Gray actually confirms that he is in Man of steel, but he can't say what character he is playing. Check out the video below a little over a minute into it. We're starting to believe that a former Smallville Luthor clone can play the real Luthor in the Man of Steel.

Man Of Steel: Lex Luthor Rumored To Have Been Revealed