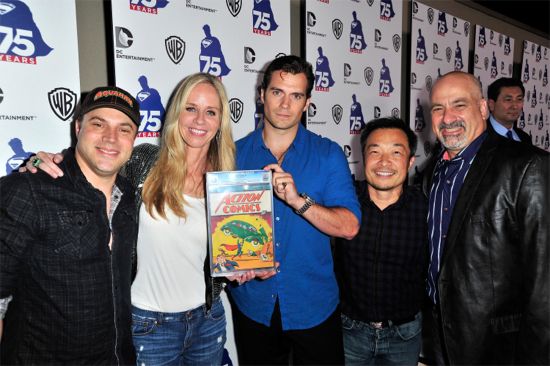 was at the Superman 75th Anniversary party, which took place at the Hard Rock Hotel on Friday night as part of 2013 San Diego Comic-Con International. During the event, Man Of Steel star Henry Cavill made an appearance, along with an original copy of Action Comics #1. Of course, Action Comics #1 features the first appearance of Superman and is an extremely valuable comic  book.

Man Of Steel director Zack Snyder was also on hand to help celebrate the 75th Anniversary of Superman. The Action Comics #1 was an original copy on loan from the personal collection of musician Jack White (The White Stripes, The Racounteurs, The Dead Weather), and the comic book arrived under heavy security to the event.

Action Comics #1 arrived in a Brinks security truck delivery following a hand-off from Tornado Comics, a comic retailer that helped facilitate the appearance in San Diego. The comic was displayed in a special, “speeding bullet-proof” display case made specifically for the event.

“There wouldn’t be a Comic-Con without ACTION COMICS #1 and Superman so it’s fitting that we’re honoring the comic book that started it all here in San Diego,” stated Diane Nelson, President of DC Entertainment. “It’s been a year filled with milestones for Superman – while we celebrate 75 years of entertainment from the world’s first Super Hero, the global success of Man of Steel proves Superman is more relevant than ever.”

Musician Jack White said, “Action Comics #1 is an important piece of history. Instead of keeping my comic locked inside a vault I want to share it with fans during key moments like Superman’s 75th anniversary, much like fine art is shared in museums.”

The event was part of a year-long celebration honoring 75 years of Superman that includes a commemorative logo, and a new, animated short that pays homage to Superman and the many iterations of the Super Hero throughout his 75 years. The animated short is produced by Zack Snyder and will be released later this year.