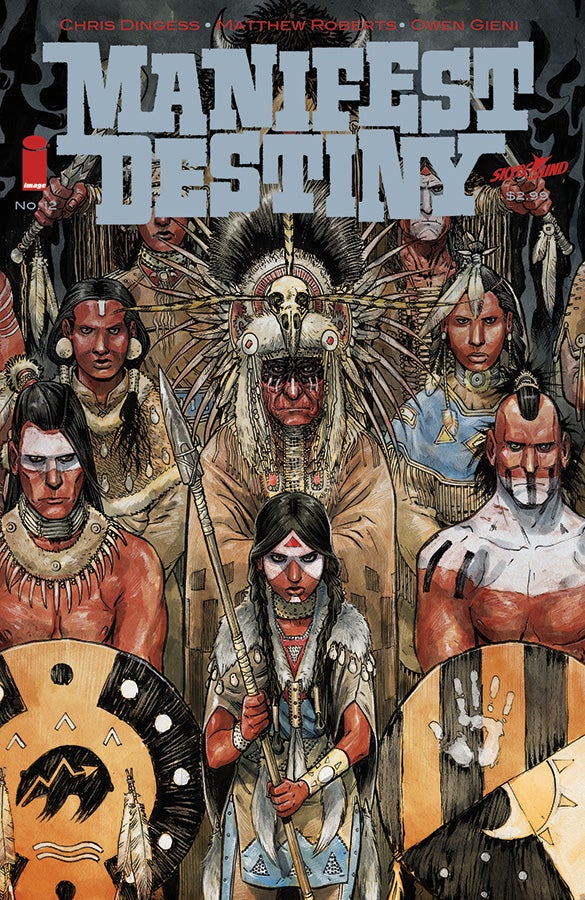 Manifest Destiny #12 is the beginning of the second year of the acclaimed series. Unlike the eleven previous installments, this is a stand alone issue. It focuses on an encounter with the Otoe tribe along with some minor events aboard the ship and amongst the crew. Chris Dingess and Matthew Roberts could have easily used this issue purely for housekeeping, to reestablish the status quo and set up future conflicts. They accomplish all of that, but go far beyond those goals as well, telling a potent story about America’s westward expansion and the nature of threats.

Threats define every interaction in this issue, whether they are threats between individuals, groups, or things to come. Every character is endangered by at least one outside force and this pressure reveals the kind of people they are and who they might like to be. Unlike the obvious conflicts presented by plant zombies and killer mosquitoes that simplify responses into fight or flight, the passive nature of a threat forces characters to think carefully about their responses. That conflict may come in the form of a powerful individual, an invading force, or an ominous, unknown beast. Whatever form it takes, it places people at a disadvantage and forces them to make careful (or foolish) decisions. It’s compelling drama and establishes stakes that are bound to increase tension as the series continues.

The relationship and implicit threats between the expedition and the Otoe are the most fascinating component of the various dynamics here. There is tension from the very moment Lewis and Clark enter the Otoe camp. Although they come in peace, their appearance represents an inevitable threat to all Native Americans living in the region. The expedition’s purpose is to plot the way for Westward expansion and the genocide of an entire people. Dingess and Roberts do not avoid this troubling aspect of the journey. Even the amicable Lewis speaks of instilling “a healthy amount of respect and fear” and considers the slaughter of the tribe at one point.

Manifest Destiny is critical of the Lewis and Clark Expedition rather than lionizing it as a purely heroic achievement (even in the face of literal monsters). Roberts’ art establishes the Otoe as protagonists when confronted by characters already familiar to readers. They are presented as a unique culture composed of fully formed individuals. There is no hint of caricature within the work. Furthermore, several of Roberts’ compositions both move the story forward and work as striking visual parables. The American flag is waved in a parade and its bright colors move over the faces of stoic Otoe men watching the first steps of an invasion. It’s a chilling moment, but nowhere near as potent as the very last panel of the issue that alludes to the death and destruction to come as Americans fulfill their self-proclaimed destiny.

Roberts sense of design is present throughout the entire issue. Despite a lack of action (compared to previous issues), he has a couple of opportunities to create new monsters to roam the Louisiana purchase. They are creepy, chill inducing creations that readers can only hope will appear again. Colorist Owen Gieni also contributes to the feel of the issue in distinguishing flashbacks clearly through his pallette. A pair of scenes from before the expedition are shown and both have a much lighter color scheme, as if the powder from President Jefferson’s wig had been dusted across the page. This choice makes for a natural visual transition to subtly inform readers of the change.

As much as the first eleven issues of the series were praised, Manifest Destiny #12 sets even higher expectations for the future. Dingess is subtly building tension and a wide variety of conflicts to drive the drama and is accompanied by Roberts’ accomplished designs and frightening sequences. Together they are only just beginning to delve into the potential of this intriguing horror-influenced examination of American history.