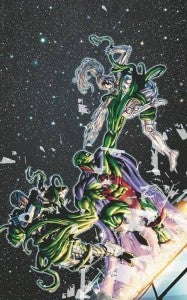 J'Onn J'Onzz the Martian Manhunter will star in a new backup feature written by Geoff Johns and Matt Kindt, featuring art by Scott Clark, which will appear in Justice League of America beginning with the series' second issue -- and if DC's blog is to be believed, the title will be shortened to just Manhunter. "To me, Martian Manhunter, you can almost do anything with him because there hasn't been a definitive take on him yet. We'll see what ultimately happens, but to me, he's always been like Superman, except he wasn't raised by human parents, so he doesn't have the human element to him. He has all the crazy strength and powers, but he also has a disconnect from humanity," Kindt (who writes the concluding Frankenstein, Agent of S.H.A.D.E. for the publisher) told MTV Geek. "There's that element, which I think is going to be interesting to play with, his true alien-ness. You forget Superman is an alien sometimes, but with Martian Manhunter you don't because of the way he looks. He's like a man out of place in a way." He's also uniquely suited to fit with a lot of Kindt's strong suits. The writer-artist is arguably best known for his work on things like Super Spy and Mind MGMT, espionage titles with a genre twist. "With Mind MGMT, I definitely try to keep it grounded in the real – what would happen if you push things?" Kindt explained to MTV. "But with Martian Manhunter, he's bonkers! He has the whole universe to go crazy. I can go even crazier with that, take some ideas I've been having fun with and push them even further. It's one thing to control someone's mind, or someone's thoughts, but it's another to be someone who can look like anything or anybody...AND have that power. It'll be crazier than anything I've done." Of course, Martian Manhunter is a character with a long association with the Justice League of America; he was a consistent feature on the Justice League in its various forms all the way up until Brad Meltzer took over the title and reinvented the lineup following the events of Infinite Crisis. More recently, he's been a key player in Stormwatch for the New 52.