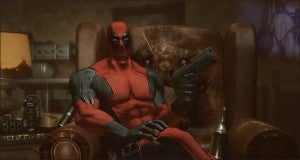 While Saturday afternoon was a huge day for movie fans, as reported here on our site during our coverage of yesterday, there was also some pretty exciting video game news as well.  Marvel broke news on several upcoming projects at their video games panel.  Serving as moderator for this panel was Marvel Games' Javon Frazi, TQ Jefferson and Chris Baker. Other notable figures from gaming companies such as Ubisoft, High Moon Studios and Gazillion were in attendance to lend their discussion as well. The headlining game for this panel came from the star of the game himself, Deadpool.  The Deadpool game will be developed by High Moon Studios, as part of Activision, and will available in 2013.  After the character of Deadpool burst into the room to deliver the news on his game himself, a follow-up teaser trailer was shown to get the audience ready and waiting for more of it to come.  For a link to the trailer, simply click here!

While this announcement is certainly big in and of itself, there were several other pieces of news from this panel.  Discussion quickly turned to the eagerly-anticipated Avengers: Battle for Earth, which will be developed by Ubisoft.  A Wii U version of the game was announced here, and a very interesting image of a Skrull Captain America was shown, which supports the already well-established notion that this game would focus on the events of Secret Invasion.  The game is slated for a fall 2012 release, and will be a motion-based game to those unaware.  For those attending Comic-Con this year, a demo of the game is available at the Marvel booth.

Also available for demo at the Marvel booth is Gazillion's online RPG-MMO Marvel Heroes.  One of the things mentioned in the panel was the vast amount of free content that would be available, as to avoid running up too may charges and expenses on the game players.  Another exciting bit of news about this game was the fact that part of it will be based on the Mutant Massacre storyline, now considered one of the classic and most iconic X-Men stories of all time.  One more piece of good news of fans who are looking forward to this game is the inclusion of Black Panther, a good bonus for any Marvel game!

Another big game mentioned was the XBox Live and Playstation Network title Marvel vs. Capcom Origins.  Coming out later this year, the game will be featured as a bundle that celebrates the Marvel vs. Capcom and Marvel Super-Heroes games of the past.  While going back to the past, some neat modern features like spectator mode will be introduced, as well as the ability to replay matches in a playback mode.  All these announcements are big news for Marvel, which looks to be competing with DC next year for attention in the video game realm.  There's plenty of variety here, so be sure to keep looking for the upcoming pieces of information on these games and more!