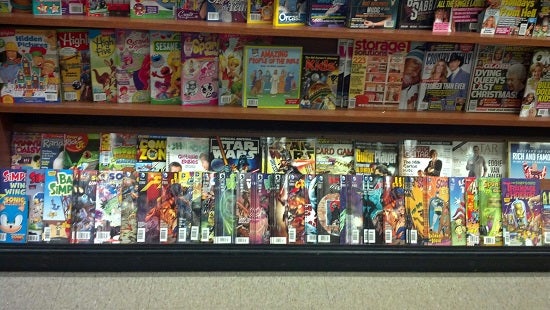 Marvel Comics today confirmed for ComicBook.com reports that have circulated all weekend that they have moved their single-issue comics out of the newsstand market and brick-and-mortar bookstores.

Marvel SVP of Sales David Gabriel told us that the move out of most retail newsstands, including the grocery store market, took place over a year ago, and that the publisher have been moving out of bookstores for months before employees at Barnes & Noble's Union Square location made the information public.

He added, though, that the publisher is working with bookstores to develop a more efficient distribution model, because Marvel's withdrawal is sales-based, not part of a long-term strategy as we had speculated earlier today.

"The overwhelming majority of print readers get their monthly comics from direct market locations (i.e. brick and mortar comic shops)," Gabriel told ComicBook.com. "There’s no denying that the direct market is a much stronger business model for monthly single issues than newsstand distribution. This has been the case for some time. New single issues haven’t been available in the overall newsstand market for nearly two years now and in book stores for at least three months without notice. We’re currently working with Barnes & Noble and Books-A-Million on a stronger, more mutually beneficial distribution model.  And to be clear, this in no way affects sales of graphic novels in either chain which have continued, as many have pointed out, on an uphill trend in the past year!"

Some direct market retailers had expressed frustration in recent years that big box bookstores were allowed returnability on monthly, serialized product that comic shops didn't enjoy. The claim was that it set up potentially unfair competition and could hurt the direct market stores, which have to order more conservatively and sell everything they order. The flipside of that, of course, is the variant covers available exclusively in the direct market, which are usually marked up to make up for he additional expense of ordering big on a given title.

Marvel's comments jive with what we've heard from other retailers who sell comics at the newsstand. While Toys R Us did not return our call in time for this story, the East Coast grocery store chain Wegmans confirmed that Marvel had pulled their comics out of the grocery store market over a year ago, citing low sales.

Marvel Confirms Move Out of Bookstore Newsstands, They're Working On Better Model