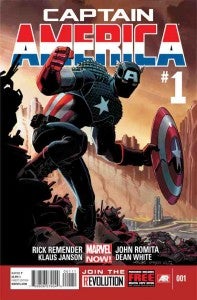 "It’s obviously an honor," Remender told iFanboy. "It’s terrifying, given how amazing everything Ed did with the character is. It was just part of the reshuffling, I think. They were asking what characters I had some love for and thought I could do something with. You’re looking at the Marvel Universe, going, 'Really? I can… I have to… What?' I was like, 'I’d probably like a shot at Cap,' and immediately the other voice in my head said, 'You’re going to follow Ed, dumb-dumb.' [laughs] The fear-ometer kind of took off at that point, but I still like the challenge, and I love the character, so I wanted to take a crack at it. It was something that everybody seemed to agree that they thought I could pull off, so off we go."

Romita, who has drawn Captain America a lot over the years, now has the challenge of trying to take his fan-favorite take on the character and turning it on its ear, trying to make something that's both recognizable and fresh with Cap's new Marvel NOW! costume redesign.

"We killed the Punisher together," said Remender of Romita, Jr. "It was the issue before Franken-Castle came, and that was the first time I worked with Dean White and John. It was a dream come true, and I never imagined that I’d get a second shot at it, especially in something like this. It’s like getting to work with Kirby. John Romita Jr. is as good as it gets. The initial fear, again, is that most of the books I’ve launched have always been either with Tony Moore or Jerome Opeña, and these are guys I’ve been working with for years. Part of the challenge that Axel [Alonso] and Tom [Brevoort] were presenting here was 'You’re going to have great artists, but it’s going to be outside of your comfort zone.' They’re taking a ballpeen hammer and just shattering everything and it’s a big shift-up for everybody. Everybody has to get used to this."

As far as last week's teasers, all this leaves is the cryptic "legacy" poster, which many had assumed was a teaser for a relaunch of X-Men: Legacy, but which writer Si Spurrier has reportedly nixed.