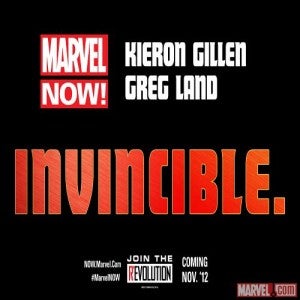 Marvel Comics released a teaser image earlier today that most are considering evidence that Kieron Gillen and Greg Land will take over Invincible Iron Man when it is relaunched in November.

The image, shown at left, simply says "Invincible," and features the names of the creators and the November release date. No official confirmation that it's Iron Man, but given the character's long-standing association with that word and the fact that the text is red and yellow, it seems likely.

Bleeding Cool had previously predicted Gillen and Land to take over an Iron Man series, as part of a group of predictions they made before Marvel NOW! was officially announced.

Invincible Iron Man was among the titles announced as cancelled by the publisher in October when Marvel's solicitations for product shipping that month hit the Web earlier this month.

Marvel NOW! Gets Invincible With Gillen and Land