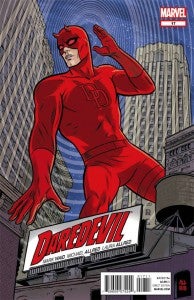 Mike Allred, the creator of Madman and co-creator of iZombie, will return to Marvel Comics in August with Daredevil #17, an issue that will feature three Eisner Award-winning creators (writer Mark Waid, Mike Allred and his wife Laura, the issue's colorist). Described by Marvel's Senior Editor Stephen Wacker as "the issue Mike Allred was born to draw," the issue will bring the artist (whose fan-favorite run on X-Statix was recentliy collected in a huge hardcover) back to Marvel for the first time in years. And, of course, there's no greater threat to the health and safety of New York City than...Stilt-Man? The kind of villain who is ready fodder for mockery, the character is as likely to be redeemed here, in a critically-beloved series by award-winning creators, as anywhere else. Here's what Marvel has to say about the issue, officially:

"It's the issue Mike Allred was born to draw" – Marvel Senior Editor, Stephen Wacker Prepare for non-stop action as not one, not two, but THREE, Eisner Award winning creators present your first look at Daredevil #17! Courtesy of Mark Waid and special guest artist Michael Allred & colorist Laura Allred, this pulse-pounding adventure pits the Man Without Fear against an old foe…Stilt-Man! Can Daredevil make it out of this grudge match in one piece? Find out in Daredevil #17, hitting comic shops everywhere, the Marvel Comics app, and Marvel Digital Comic Shop this August. DAREDEVIL #17 (JUN120656) Written by MARK WAID Pencils and Cover by MICHAEL ALLRED Colors by LAURA ALLRED On Sale – 8/15/2012