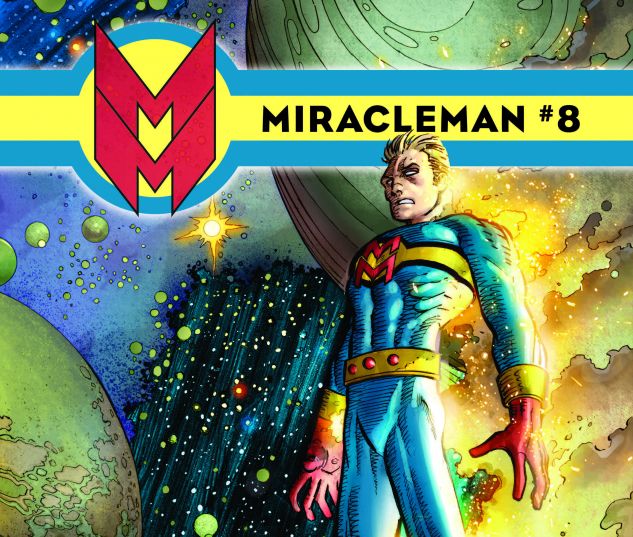 This is slightly depressing. Reading through the Miracleman series, I've been impressed at its beautiful marriage of excellent writing and gorgeous art. Have there been slight missteps from the writer, Alan Moore, and the artists, Garry Leach and Alan Davis? Yes, but nothing that really detracted from the overall experience. In the early issues, Moore had a tendency toward excessive amounts of overblown prose but a reader could see that improve as the series continued and it resolved fairly quickly into a balance of text and art telling the story. Leach did beautiful, technically flawless work and Davis improved quickly over the issues in which he handled art duties to become a truly excellent artist. Both Leach and Davis at their best felt polished in their overall look as well as inventive with panel layouts and the angles at which they depicted the action.

Now, we have Chuck Austen handling art duties for the entirety of this issue. It isn't as though Austen is horrible. When his work first cropped up in the last issue, I described it as a disappointment. Moving from Davis to Austen it was "as though I'd become accustomed to excellent filet mignon and was then handed a bog-standard hamburger." In a series less well-written and that had established a lower bar for visual quality but here Austen's art is, for lack of a better word, depressing. Faces are less competently rendered and expressions are vaguer, lacking the subtlety of emotion captured in past issues. Figures are similarly "correct" in terms of anatomy but they feel more stiff and sometimes it feels as though they were drawn from certain angles because it is simply easier to draw them from that view. The panel layouts too aren't doing much for me; however, I'm not entirely sure if that has to do with Austen being uninventive or if this section of the narrative is just too straightforward to allow for clever turns and experimentation. I suppose I could go on but I think I've conveyed a general sense of things. The bottom line is that the art in this issue is disappointingly competent.

While I'm discussing the art, let me just step back for a moment and briefly address the cover. John Romita, Jr. (JRJR) is a great artist and I love his work and this is a very nice piece of art. I am a bit sad that we don't get more work from Alan Davis but JRJR is an excellent artist in his own right with a defined visual style. My only complaints are that this is more of a pinup and less of a cover, having no connection to the content of the issue, and that Miracleman's pupils are missing. I know that's the smallest of nits to pick but I can't help but be reminded of that phenomenon of '90s-style comic art that some have termed "Youngblood's Disease" where character just don't have pupils for some reason. Still, this is beautiful work and kicks the stuffing out of the interior art. 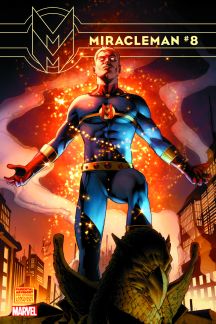 Moving to the narrative, there are some interesting turns here. Moore has been providing a thoughtful and well-crafted narrative all the way along and this issue is no exception. Possibly the most interesting element here is Miracleman's turn to violence. In previous issues, I don't recall him taking life nearly this casually or so bloodily. When he and Evelyn Cream broke into the Project Zarathustra bunker, men almost certainly died but did so as a result of their own failed attacks on Miracleman. He didn't even kill Johnny Bates when he had the opportunity. Here though, Miracleman almost casually pushes his arm through a man's chest after hoisting two men over his head and smashing their skulls together. I'm not sure what this bodes for future issues but it is an intriguing development. It certainly calls into question the nature of Miracleman and what seemed to be his innate goodness up until this point.

Further calling into question Miracleman's nature and state of mind is the way in which he dispatches Gargunza. It isn't the fact that he kills him or the way he kills him. Rather, it's the fact that he kisses him immediately prior to ending his life. I'm not sure what to make of this but I wonder if something is now off-kilter in Miracleman's psyche. This kiss comes out of nowhere and seems disconnected from Miracleman's attitude toward this vile man. I can understand why Miracleman kills him in the way that he does, meditating on Gargunza's wish for godliness, but this kiss is another matter entirely. It is certainly thought-provoking if nothing else.

Another interesting narrative choice is bookending the chapter "The Wish I Wish Tonight" with the "star light, star bright…" nursery rhyme in the narrative captions. It's a clever choice as Miracleman does shine like a star in the night, seemingly fulfilling the wish of Gargunza's former Nazi henchman to see the promised Ubermensch. Then, Gargunza's spectacular demise at the end of the chapter quite obviously connects to the rhyme. Beyond its appropriateness, the use of this bit of poetry creates a stark and engaging contrast between the callous and horrific actions being depicted and the sweet innocence of the rhyme itself. Rather than coming across as merely cute, this narrative element works on a number of levels that I quite enjoyed.

The one piece of the narrative that I was less enthusiastic about was the way in which Miracleman's alter ego, Mike Moran, survived the attack by Miracledog. I suppose it makes perfect sense that merely saying the dog's trigger word "Steppenwolf" again would change it back into a harmless pup but it does feel a bit anticlimactic. It's also a bit nonsensical from the point of view of Gargunza's plan. Gargunza used the word in front of Mike and as such wouldn't he expect him to try saying it again to make the dog revert back? It occurred to me that the word might work like this but then I figured that would be too simple. If this was the case, wouldn't Gargunza have whispered it in the dog's ear so that Mike couldn't have heard it? Shouldn't he have figured out two triggered words acting as respective "on" and "off" switches? Wouldn't an evil genius like we are supposed to believe Gargunza is have thought ahead about this eventuality? This doesn't ruin the story for me but it does feel like a bit of a narrative cheat or at least a point of weakness in the story thus far. Maybe I just expect more from Moore.

Moving to the rest of the book, I'm not going to say much about "The Guerneville Flood." Apparently the Eclipse Offices were flooded and this was a framing device to run some reprints while they got back on schedule and could meet their deadlines. It's cute, clever, and reasonably well-drawn. I applaud Marvel for including it for completeness sake though it would have been nice to get more narrative instead. I will say that it's head-scratching that Marvel had to swap out Alan Moore's name for "The Original Writer" in an actual speech bubble where he was mentioned. Did Moore really have a problem with this or did Marvel just not bother to see if he cared and removed his name per the overarching agreement? I can understand why this was done but it seems silly.

Turning to the back matter, I going to say it again… Can we get a prose piece that puts the work into context, Marvel? What we do get is decent material but I don't know that I'm getting much out of seeing Chuck Austen's pencil roughs? It's these roughs that make up the bulk of the back matter but there is little deviation between them and the finished product so I'm not sure that anything is being illuminated for me. More interesting are the cover and house ad roughs, production mechanicals, and finished products. Once again, we also get an old Marvelman reprint by Mick Anglo and Norman Light. It's charming and silly, but I don't see that it connects much to the content of the narrative. It deals with holdover Nazis in a story called "Shadow of the Swastika," but aside from Gargunza's status as a former Nazi and allusions Nazism I don't see how this is particularly complementary to the narrative content of this issue.

Overall, this isn't a bad issue. The story is still excellent for the most part and I'm still excited to read more. The art is the most disappointing element but even then it's competent. I'm still highly recommending this series even with its faults. Marvel is still doing an excellent job presenting this material though they could do a bit better in terms of the back matter. In the final analysis, Miracleman is still a pretty miraculous read.