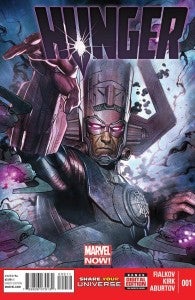 For about a week now, we've been hearing rumblings about "Share Your Universe," a new digital initiative that Marvel will apparently roll out in July. It's not totally clear exactly what the initiative will be, although obviously "share your universe" immediately makes us wonder whether Marvel will roll out something in their app that's a bit like the "LendMe" function on Barnes & Noble's Nook or other similar digital-loan services available on ebooks. It could be something as simple as sharing the AR features, which Marvel recently have suggested they'd be uploading to their YouTube account and the like, making them a bit easier to digest than in the AR player, where if you miss something you have to replay the video in its entirety. What is clear, though, is that Hunger #1, the massive, upcoming story spinning out of Age of Ultron in which Galactus heads to the Ultimate Universe Earth in the hopes of feeding on a world similar, but not identical, to the one that has turned him away so often over the years, will include the "Share your universe" branding and whatever features come with it. It's clear because, with the big secret at the heart of the story revealed with this week's Age of Ultron #10, Marvel have released a first look at Hunger #1 by Joshua Hale Fialkov, Leonard Kirk and cover artist Adi Granov. Check out the solicitation text and preview pages below. It's interesting to note that on the art pages, not yet cropped for publication, you can see that the tantalizing title of the story, "Hunger," which kept fans guessing, was at one point the easier-to-guess Ultimate Galactus. • The fallout from AGE OF ULTRON rips open a dangerous rift in the universe! • Prepare for a hunger so strong, that no universe is safe. • Is this the beginning of the end? 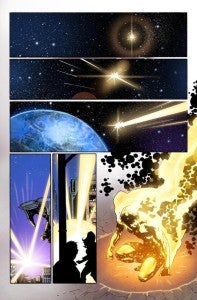 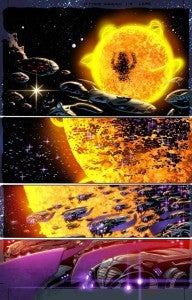 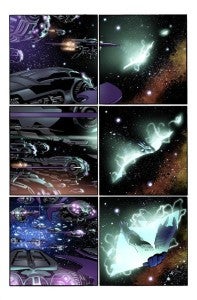 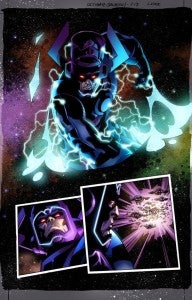 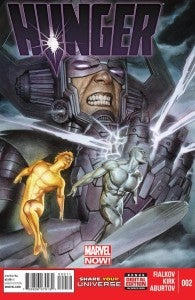 Marvel: Share Your Universe, While the Ultimate Universe Shares Galactus

Star Wars: One Line of Dialogue in Obi-Wan Is Causing a Wave of Padme Love