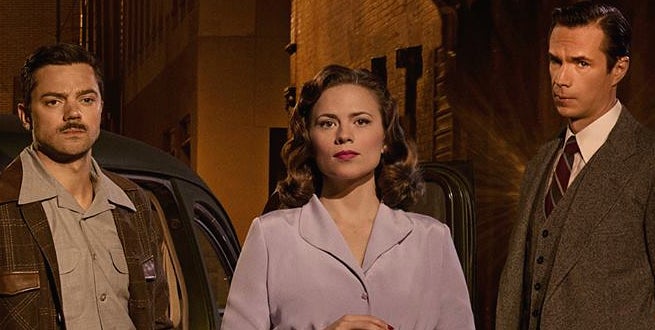 Marvel Entertainment has released a new promotional image with Howard Stark (Dominic Cooper), Peggy Carter (Hayley Atwell), and Edwin Jarvis (James D'Arcy) and an official synopsis for for the sixth episode, "A Sin to Err."

"A Sin to Err" - Peggy discovers the shocking truth about Leviathan but doesn't realize that her true enemies are even closer than she imagined. Meanwhile, Souza is close to confirming the truth about Peggy and may just put her in the crosshairs of the SSR.

If Agent Daniel Sousa (Enver Gjokaj) does uncover the truth about what Peggy has really be up to what will he do with it? Do you think he'll tell Agent Jack Thompson (Chad Michael Murray) or Chief Roger Dooley (Shea Whigham) with the hope of being seen as an equal?