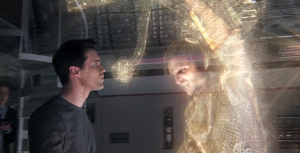 A 15-second spot for Marvel's Agents of S.H.I.E.L.D. debuted yesterday during the first game of the NBA Finals between the San Antonio Spurs and the Miami Heat, and now ABC have made it available online. The spot doesn't give any particularly new information beyond what fans already learned in the show's first, two-minutes-plus teaser last month--but there are bits of new footage and much clearer shots of S.H.I.E.L.D.'s holographic computer interface than we got in previous trailers. Check out the teaser below.