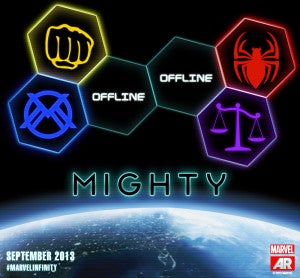 Marvel has released a third teaser for the "Mighty" team whose title will spin out of Infinity later this year. The logos--less well-known than Spider-Man's was yesterday but arguably right on track with Luke Cage's on Monday--are those of Adam the Blue Marvel, "a phenomenally powerful character--a man whose conscience told him he had to stand down at the request of his President," said Marvel senior vice president of publishing and Infinity editor Tom Brevoort, adding, "the time has come once again for him to step onto the public stage in a big way." She-Hulk is the second character. "She's juggled a lot of things; in the past she's served with The Avengers, the Fantastic Four, the Defenders for a little bit...so when a band of character is pulled together, she's an essential piece in keeping the gears moving." You can see Brevoort speak about it using your Marvel AR app on the image at left.