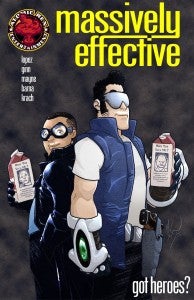 , the superhero action-comedy from creators Marco Lopez and Bryan Ginn, had the potential to be one of those great titles that few people ever got to read--but it's doing brisk business in its existing digital venues and, as of the end of July, they've begun adding some major retailers and digital outlets to the equation as well. The last time we talked to the pair, they were set up at Drive Thru Comics but larger venues were still treading water with getting Massively Effective live. Now, it seems, they're making inroads; the book is  now available on Amazon's Kindle, with more formats coming in the next couple of weeks. Lopez and Ginn joined us to talk briefly about the series, its unintentional title similarities to a popular video game franchise, and the fact that, yes, they're aware there's a tiny bit of Booster Gold in the books' DNA. ComicBook.com: The series, of course, isn't a cash cow. You're still kind of finding venues to make it available to fans, so--what's next? Do you try and make more, or is it a question of developing some of your other properties? Lopez: We're doing other stuff, too--film stuff, things like that. With Massively Effective, we paid out of pocket, our own money, for everything. The coloring, inking, lettering--so the mentality is that if it does well enough to where it can pay for itself, we don't care if it can pay for us. We're not looking to make any money. If it makes enough to pay for the next miniseries, cool, if it doesn't, then we'll see down the line based on the future of the other books that we're releasing. Ginn: The future of Massively Effective falls on its shoulders. If it can pay for itself, it'll just keep coming out. If we don't make a dime off the book, that's fine--as long as the book can pay for itself, we'll keep making it. ComicBook.com: Now, there's a Mass Effect poster in this series. What's the deal with the relationship you have with that video game in-story? Ginn: The thing with that poster is that the comic was originally called Mass and Effect, becuase their names are Mass and Effect. I think on the poster...I don't know if it has the "and" part. And then I started remembering the whole thing that Jason Rubin went through who did the comic book for Aspen that was called "Iron and the Maiden," and then Iron Maiden was suing them, saying they were too close to their trademark. It went back and forth and eventually he ended up changing the name to Iron Saint. So the comic shop was called Massively Effective Comics, so I was like, "Let's just change the title to Massively Effective." We didn't call it Massively Effective, and it wasn't originally called Mass and Effect, to get Mass Effect fans to read the comic book so we're hoping with Massively Effective that nobody has any problems with. Our backup title is just called "Massively Effective Comics," just like the comic shop [laughs]. Lopez: Yeah, our original title was going to be "If Villainy You Detect, Just Call Mass and Effect," and then the whole Mass Effect video game became big and I was like, "Let's change the title. Just number one so there's no confusion and number two so we don't get sued." But the poster in the comic shop is because the two characters back in they day at some point licensed their rights away and made a bunch of movie selling comics and merchandise. That's how they actually--they used that money to open up their own comic book shop, so we threw that in there as a couple of different references. ComicBook.com: I can appreciate that. I'm a big Booster Gold guy, and he's done that before. Ginn: Yeah, we're huge Booster Gold and Blue Beetle fans. ComicBook.com: Now, is it just me, or is there a shift in the art style between the first two issues? Lopez: The reason for that was that when we had the first issue drawn, it was black and white. We were planning to do a black-and-white comic and colors were sort of expensive so when the artist drew the first issue, drew it with heavy inks becuase that's how it was going to be. Then we shopped around the first issue and a publisher we were talking to suggested we do it in color. So starting with the second issue, our artist said, "Okay, well now I'm drawing for color and inking for color." There is a slight difference and that's why you'll see that between the first and second issue. Ginn: If I'm not mistaken, when he was drawing the book on the first issue he also did boards. Lopez: Yes, on the first issue he had boards and maybe even the second issue but by the third and fourth it was all digital. You'll see that the art gradually changes and you'll see where the writing changes to match the art. At the beginning they're superheroes in '80s cartoons and everybody's having fun and then as the story becomes more serious you'll see them stepping out of that and everything will sort of change. And it's kind of--I don't want to say a happy accident because it happened the way it did, but I guess that would be a good explanation.