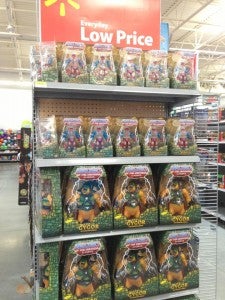 In an odd twist, a pair of Masters of the Universe Classics action figures--collectible toys intended for sale only via the Mattel website--have appeared for sale Wal-Mart with no prior notice from the retailer or Mattel. Mattel had reportedly admitted previously that they were exploring third-party retailers as an option for unloading some of their unsold stock of older figures, since presumably a limited line for collectors has fairly little warehouse space available. They hadn't mentioned Wal-Mart specifically, but since the Wal-Mart in this photo is apparently located near one of Mattel's California warehouses, this may have been a smaller scale deal brokered between the store and the warehouse. They've also been known to offload dead stock at Ollie's Bargain Center, and likely other retailers as well. A blog post at He-Man.org that seems to be the first major push the photos got includes a link to a forum where not every fan is particularly happy about the apparent change in the Matty Collector business plan.

Not a dream and not a hoax, true believers! He-Fan Zodak74 reports that MOTUC figures are being sold at a California Walmart in Moreno Valley! Another fan, Dregen has brought three Robotos and has posted a picture, which can be seen in News Images below. So far, the only characters to appear thus far are Roboto for $16.97 and Gygor for $24.97. Some fans have speculated that since Mattel storehouses are near the Walmart in question, that Mattel is trying to unload some of the stock that isn't moving on Mattycollector.com. Others have the hope that Mattel might be testing MOTUC for retail. Toyguru has yet to respond to any questions about this subject, but this story will be updated as soon as more is learned! See what the fans have to say HERE!

A call to Mattel's press line was not immediately returned; the story will be updated if and when there is an official response.