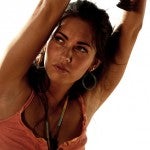 'Transformers: Revenge of the Fallen' opens today in theaters and Craveonline sat down with star Megan Fox. Here are some highlights: On what the original 'Transformers' film did for her career:

I think the movie, its success and how well it was received has opened a lot of doors for me career wise and I've been able to be a part of some films that I don't really feel like I deserve to be a part of and that due greatly in part or solely to the success of Transformers. I just did Jonah Hex with Josh Brolin and Michael Fassbender and John Malkovich. People in general, just actors don't get those kinds of opportunities. For me to have that is a huge blessing and that's because of the success of this movie.

About her character in 'Jonah Hex', the film she's currently shooting:

I think they're naming her Leila now. She's sort of a twisted love interest to Brolin's character, to Jonah. She's a prostitute that he goes to see often.

Regarding the rumors that she's been offered to be the next Lara Croft:

No. That's a complete rumor. I haven't been offered that. No one has even spoken to me about doing that yet.

For the entire interview, check out the link above to CraveOnline.