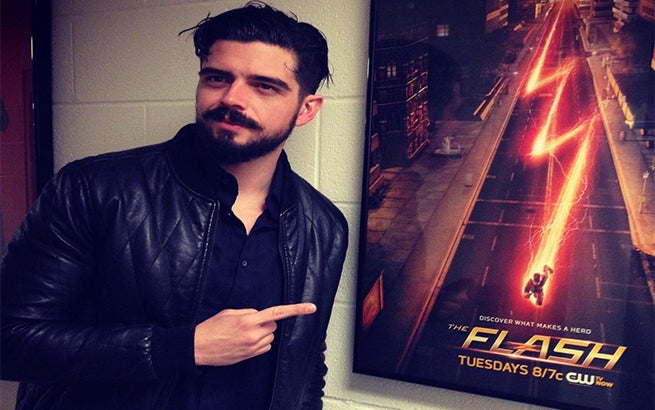 Tonight, viewers of The Flash will be introduced to a brand new character, Clay Parker, portrayed by Micah Joe Parker. ComicBook.com caught up with Micah for an exclusive interview, providing a little insight to the character.

There's very little known about this Clay Parker character, but what can you tell me about him?

At the top of the episode, Clay Parker is locked up in Iron Heights Prison and this other character, Shauna, who;s going to be introduced tonight, breaks me out of prison with her teleportation power and we kind of go this Bonnie & Clyde type journey through the episode- which is of course a pain in Flash's side. That's pretty much what our storyline is, I don't want to give too much away before tonight. It's a meta-human Bonnie & Clyde episode.

It must have been awesome, getting the call to be cast on The Flash.

Oh, it was awesome.

Will we see your character again after today?

That I can not say, for certain. You'll have to watch the episode and see what happens and I can't wait to hear people's thoughts to be honest with you.

I auditioned for Barry Allen over a year ago. I knew that the show was going to be happening, but they started with Arrow spinoff, with Barry Allen introduced on Arrow. So, I was always kind of keeping a bug in my agent's ear about looking out for roles in [The Flash] because I want to be part of it so badly. So, when I finally got the opportunity it was pretty awesome. Shipped to Vancouver. It was great, beautiful city.

It must be cool logging into your Facebook a few months ago and seeing your picture on top of the ComicBook.com article talking about your casting.

Yeah, obviously I knew before that, but I had to keep it a secret. I had to be pretty secretive about The Flash. I couldn't post anything on Twitter, on Facebook, until I was in Vancouver. Then I saw the article I was like, "Hey, I can tell people!"

Do you read the comics?

Honestly, as a kid I wasn't big into comics. I know that with Grant, when he got the role, he started reading all about the the Flash. I just don't know where to get started.

Yeah, it can be tough. If you were to play one super hero in a movie, who would it be?

I think it would be Superman. I kind of like the Clark Kent, Superman combination. I love that transformation: being able to conceal your identity with a pair of glasses. Then, you take the suit and tie off and you're the man of steel. Got some great hair, too.

You can see Micah Joe Parker in tonight's episode of The Flash titled, "Crazy For You," at 8 PM EST.