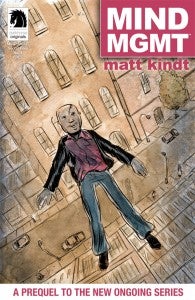 "It's slow. They're looking for a screenwriter that they like. It's in development," Kindt told CBR when asked about the film. "I honestly don't pay much attention, because I'm too busy. [Laughs] That stuff takes care of itself. They'll figure it out, and then my job is to keep doing the comics. They'll call me with updates every once in a while. 'We're talking to this guy, or that guy.' I'm willfully out of the loop. I can't do much. I can worry about it -- I'd rather work on the comics."

The series, scheduled to run for 36 issues, is mostly written at this point; Kindt told CBR he's already up around #25 or 26. It was optioned in January of 2013.

“Mind MGMT is basically a secret organization of super spies that have mind control powers but those power vary from agent to agent,” Kindt explained to ComicBook.com during an interview in May of last year when the series was launching. “So you’ve got some agents that can make you forget things, some agents that can make you not see things–there’s other agents that can’t be killed–they have this mind over matter ability where you can hurt them but they’ll heal themselves up. There’s another guy who can make you believe that he can kill you with his finger. So he doesn’t have any weapons, but he can make you believe that he can kill you and then he can, and he does. So it’s kind of a weird sort of spy book. It’s also my first monthly book that I’m writing and drawing, so I’m trying to plant subliminal messages and little hidden things and fake ads on the back cover and extra stuff that they’re putting in there. I don’t read monthly books anymore so I’m trying to do things that would hook me back into going to the store every week.”