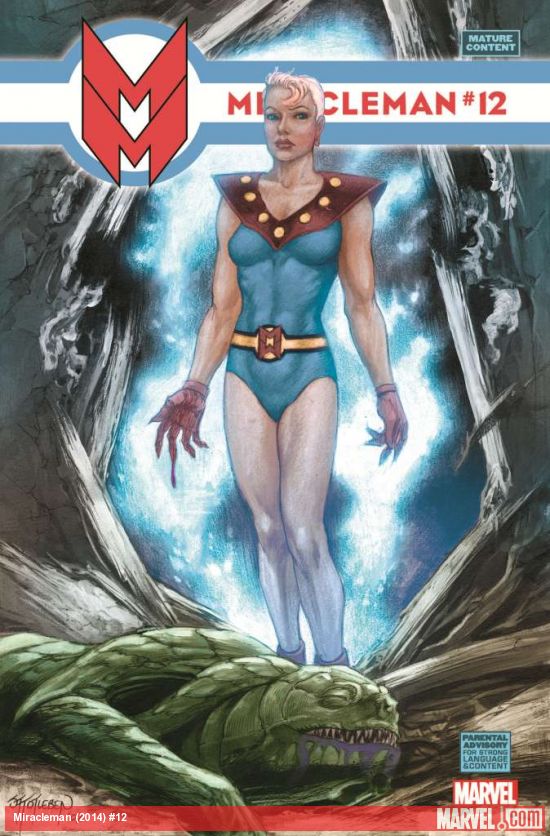 Some time ago in a past review of this series, I made reference to Alan Moore’s noted tendency to include rape and/or sexual violence in his stories. I simply noted the fact that the subject had come up and moved on without really commenting or passing any kind of judgment. It didn’t really bother me too much but the discourse around depictions of rape in media has perhaps sensitized me a bit toward the subject so I thought it worth mentioning.

It doesn’t help that just about every one of Moore’s stories that I’ve read has included some form of sexual violence, whether it be Hyde and the Invisible Man in The League of Extraordinary Gentlemen, the Joker and Barbara Gordon in Batman: The Killing Joke, the Comedian in Watchmen, etc.

Earlier in Miracleman, Dr. Gargunza simply noted when relating his backstory that he, as Miraclewoman reminds us here, “first became a rapist aged fourteen.” Here though, sex, sexuality, and rape are more-or-less the central focus of the issue. The meat of this book is Miraclewoman’s backstory. She, like Miracleman, was an orphan captured by Gargunza and turned into a form-swapping superhero. Unlike Miracleman though, she and Terrence Rebbeck who would become Young Nastyman were abducted without the knowledge of the military intelligence agency Spookshow. As result, Gargunza was free to mold and use these two individuals as he saw fit.

Miraclewoman informed that reader that while she became Gargunza’s plaything and a sex object to be repeatedly used without her knowledge and consent, Young Nastyman was a kind of Gargunza surrogate performing all manner of depravity. It seems as though the ultimate goal was to align Miraclewoman and Young Nastyman’s desires such that they would eventually couple and produce a child which would have served the same purpose intended for Miracleman and Liz’s daughter Winter. Unfortunately, things went wrong when Young Nastyman’s mind snapped from the inconsistencies inherent in Gargunza’s induced dreams, woke up, and began wreaking havoc in a localized sort of way. Quickly this precipitated the awakening and subsequent attempted destruction of the Miracleman family, the awakening of Miraclewoman, Young Nastyman’s death at Miraclewoman’s (and a volcano’s) hands, and the flight of Gargunza to South America, setting up the status quo at the start of this series.

I’m not going to delve too deeply into what some might label a preoccupation with sexual violence on the part of Alan Moore since I am not a psychologist nor do I feel qualified to engage in close analysis of the subject. There is however one line in particular which seems questionable to me buried in this whole milieu of depravity. In describing Gargunza’s rape of her physical body while her mind was free to roam in a beautiful and wonderful cosmos, she says the following of viewing the recorded video footage of the violation:

He gave me freedom, in a perfect world, receiving in return my crotch. I laughed and laughed.

I wonder what, if anything, this says about Moore’s attitude toward this subject matter. It seems an odd choice to me for Moore through Miracewoman to arguably trivialize the act of rape by making this character literally laugh it off when compared to the freedom that her mind was given. Miraclewoman does not apparently feel violated or carry any kind of lingering detriment from learning about her treatment by Gargunza which feels in some way deeply problematic. One could make the point and it is intriguing to ponder whether rape is anything more than a physical act to be healed from and moved past like any other when the psychological elements are removed as was the case with Miraclewoman who only learned of the act after the fact.

Still, removing Miraclewoman from the psychological experience of the rape at the time of its commission does not remove her from the reality of seeing it performed on her unconscious body in a video recording. I have to question whether Moore has really grasped the truth of what someone, even a super-powered someone, would feel in response to learning of her violation at the hands of someone that she herself has described as a “troll.” Don’t get me wrong, I understand the point that I take Moore to be making about the poor trade that Gargunza received in the limited physical experience he took from Miraclewoman while she received a vastly unlimited mental experience unfettered by logic and physical limitations. Still, the attendant implications are unsettling.

Moving on to other aspects of this issue, I find it quite intriguing. The form-changing alien attackers known as the Qys from previous issues are joined by the Warpsmiths of earlier back-up/fill-in stories to take the Miracle-pair away to apparently learn more of their origins. I’m quite excited to see where this goes, particularly as the Qys who had seemingly attempted to kill Miracleman and Miraclewoman are now playing nicely with the pair. Additionally, the scene of Johnny “Kid Miracleman” Bates being attacked by bullies is building up to an even greater extent what I believe will be a cataclysmic unleashing of his darker form.

Unfortunately, I cannot say that this issue is a complete success. There remains the unnecessary confusion of captions in colored text boxes intermixed with unboxed captions whose visual distinctiveness serves no apparent function. It isn’t particularly helpful that Miraclewoman is getting in on the act as well though I suppose it helps that the framing device of Miracleman writing down his story has been dropped which removes a third type of narrative caption. Sticking with the narrative captions for a moment, Miracleman’s prose from the then-future of 1987 has become, if anything, even more overwrought. Part of me feels and can understand that Moore may be trying to deliberately obfuscate the details of the future so as to give hints about the future of this narrative without spoiling the eventual reveals. The rest of me however cannot help but roll my eyes at text such as:

By moonlight, London’s a floodlit asylum. The jet’s shadow slides down the western face of Olympus like the corpse of a black paper bird, borne upon a chrome Niagara.

Goddess of pulp lust, cold Chrysler glamour, I ascend into her soundtrack of forgotten high-school pop and digitally sampled torch-songs. I rise up to eyes like glaciers, lips like fate.

Adrift in these erogenous zones, I hear gorgeous thunder sound in distant rooms and feel the energy she’s freed. A grid of quickened pulses that sparks blue across the arc-gap between fingertips upon a café table, fires the human dynamo until its coils blaze white with power enough to make songs true…

Part of me can’t help but feel as though a writer who uses such language is simply making an unnecessary effort to sound erudite for no reason but to flex his linguistic muscles for the reader. Perhaps that is a cynical perspective but I admit that I may have some personal bias here.

One last thing that I’ll mention on the writing side is that I can’t help taking a dim view of Miraclewoman’s apparent assertion of homosexual desire on the part of Young Miracleman for Miracleman. This wouldn’t bother me except in a story installment which feels as though it is so self-consciously dark and “mature,” this sort of revelation seems tacked-on. This is particularly true given that a previous side or back-up story implied that Dick “Young Miracleman” Dauntless in fact fancied the ladies.

In terms of artwork, this issue is fairly excellent. John Totleben does wonderful work throughout both in utilizing his usual style for the “real world” segments and effecting an older comic book-y aesthetic for the scenes described by Miraclewoman as taking place in Gargunza’s fictional construct universe. There is quite a lot that is great and nothing that is really overtly negative in terms of execution. Unfortunately, I find myself somewhat overwhelmed by the panel arrangements. Rather than mirroring structures, thematic relationships between ordered and chaotic panels, or anything else implying a deeper meaning or though behind them, most of these pages simply jumbled or matter-of-fact. Still, Totleben’s work is certainly visually impressive and the best this series has seen since the later work of Alan Davis. At times it event approaches Garry Leach’s polished material, particularly in the 1987 segments where a great deal of technique and detail has gone into rendering a larger-than-life futuristic citadel.

At this point, the back matter is barely worth mentioning. We are given more original art which in the case of Totleben is at least intriguing in its changes and the application of various techniques from pencils to finished inks. The Marvelman reprint is fairly unremarkable in its brevity, it only notable points coming in the insensitive portrayal of native peoples and Marvelman’s appropriation of Little Orphan Annie’s catchphrase “Leaping Lizards” as applied to rather fancifully designed dinosaurs. There remains no insightful pieces reflecting on Miracleman’s importance to the form of comic books.

In the final analysis, this series remains thoroughly engaging despite any distraction that results from Moore’s storytelling tropes/preoccupations. I still thoroughly recommend the series as it seems to me that periodic storytelling really is beneficial for the pacing here. Still, the longer I keep up with this series and the more disenchanted I become with the unvarying back matter, the more I wonder if the $4.99 price tag isn’t a bit steep. Still, I can honestly say that I’m very much looking forward to the next installment and have no qualms about picking it up for my own enjoyment.