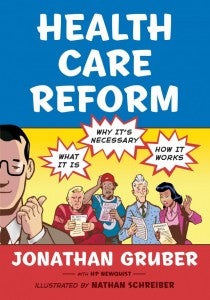 A CBS affiliate in Boston is reporting on an MIT economics professor who has written a 140-page original graphic novel explaining the Patient Protection and Affordable Care Act, better known to its conservative critics as "Obamacare" and to the media as "Health Care Reform," which is the title of the comic. "I think this book has a point of view. I support the Affordable Care Act. I believe in it," Jonathan Gruber told WBZ in Boston. The idea of the comic is to render the health care act--which has been widely criticizes as being too long to read or easily undestand--comprehensible to the layman. Rather than the dry, direct adaptation taken with graphic novels like The 9/11 Commission Report, Gruber's Health Care Reform is an anecdote-based explanation of the bill's benefits, following four characters who live under different economic, employment and insurance conditions through a similar set of treatments and how the law touches each of their situations differently. It's probably not surprising that comics are being used as a forum for a work like this--after all, investigative journalist Greg Palast recently announced a comic book adaptation of his new nonfiction book Vulture's Picnic, with art by Transmetropolitan and The Boys co-creator Darick Robertson and co-edited by this writer. And just yesterday, news broke that Marvel Comics and Visa were teaming up to use The Avengers as a teaching tool in a comic meant to help children learn to save their money. The nonprofit group Reading With Pictures today announced a star-studded comic book textbook for schools. It's also hardly a new phenomenon--during his years of military service, Will Eisner wrote and drew numerous comic-based instructional, health and safety manuals intended to help soldiers who were marginally educated.