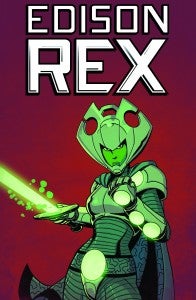 The second issue of Monkeybrain Comics's Edison Rex gave us an almost manic look at its hero, the former villain Edison Rex who is looking to take control of his media profile and convince the world that he's now one of the good guys, following his murder of Valiant, the superhero who has "kept him back" for all these years. It's an uphill battle, though, as the public at large seems to see villainy and ulterior motives in everything Edison does, while his own #2, M'Alizz, spends most of the issue looking at each setback as an opportunity to fall back on villainous ways. Series writer and Monkeybrain Comics co-founder Chris Roberson joined us to talk about the issue. Will we find out what it is that makes M'Alizz so loyal to Edison? I mean, she clearly has a different worldview than he does...! Yes, we've got a very detailed backstory worked out for M'Alizz, explaining why she has chosen to hang around and take orders from Edison in the first place, when clearly she would much rather be out conquering something or other. I'm sure we'll get around to showing some of that backstory sooner rather than later!

Did it not occur to Edison along the way that having a key part of his plan be "put the bus full of kids in danger by throwing the radioactive lunatic at it" might not be the best way to get the adoration he's looking for?

Give him a break, he's new at this!

That said, had he considered a little louder banter? Those reporters obviously didn't get what was going on...!

They saw two guys fighting, and drew their own conclusions. As you might glean from the "REXfiles" text pieces at the back of the issue, though, Edison doesn't seem to have a lot of respect for reporters or the media in general. But it suggests a problem that Edison is going to have going forward. He hasn't bothered too much about public opinion in the years that he was "Valiant's arch nemesis," but now that he's decided to take on the role of "defender of Earth," he's having to think more like a politician, concerned as much with how his actions are perceived as he does about whether or not he gets results.

What is it that made you go with the mock Shakespearean on The Nuclear Norseman? Been watching a lot of movies lately?

It just came to me!

And the million--BILLION!--line? Is that an Austin Powers reference?

Not intentionally, but given how many times I rewatched those movies, it's probably an unconscious influence, yeah.

How much input do you have into designing things like Edison's weapons? They're delightfully like old sci-fi movies.

With most of the design elements, I leave it up to Dennis Culver. He's got such a fantastic sense, that I just have to say "giant ray gun" and he goes to town! Just wait until you see what Dennis has been working on for the third installment, though!

You know, I don't like onions on my pizza, either. Maybe ol Sven isn't such a bad guy!

You and me, both! Onions are just about the only pizza topping that I just can't abide.

So, not only did Valiant have the homicidal urges, but now it looks as though the entire B.S. story Edison came up with to lure him into the suicide booth was for real! What are the odds?0comments

All I can say is, Keep reading!

And that woman's hair and uniform makes me feel like this is maybe a little closer to Supreme than Superman. Any chance we'll see a handful of these guys from across time and space?

We haven't seen the last of the mysterious woman from the epilogue!