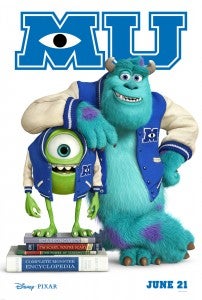 In advance of next month's 3-D reissue of Disney/Pixar's Monsters Incorporated, Disney has released the first official theatrical poster for Monsters University, the much-anticipated prequel that will reunite Billy Crystal and John Goodman, along with co-stars Steve Buscemi, Dave Foley, Joel Murray and more.

You can check it out at right and pre-order your tickets to Monsters, Inc. in 3-D at your local theater or through movie ticket sites like movietickets.com or Fandango.

Monsters, Inc., originally released in 2001, was nominated for four Oscars®: Best Animated Feature Film, Best Original Score, Best Sound Editing and Best Original Song—“If I Didn’t Have You,” for which it won.

Here's the description of Monsters University, per Disney:

Mike Wazowski and James P. Sullivan are an inseparable pair, but that wasn’t always the case. From the moment these two mismatched monsters met they couldn't stand each other. “Monsters University” unlocks the door to how Mike and Sulley overcame their differences and became the best of friends.

Screaming with laughter and fun, “Monsters University” is directed by Dan Scanlon (“Cars,” “Mater and the Ghostlight,” “Tracy”) and produced by Kori Rae (“Up,” “The Incredibles,” “Monsters, Inc.”). The film opens in U.S. theaters on June 21, 2013, and will be shown in Disney Digital 3D™ in select theaters.