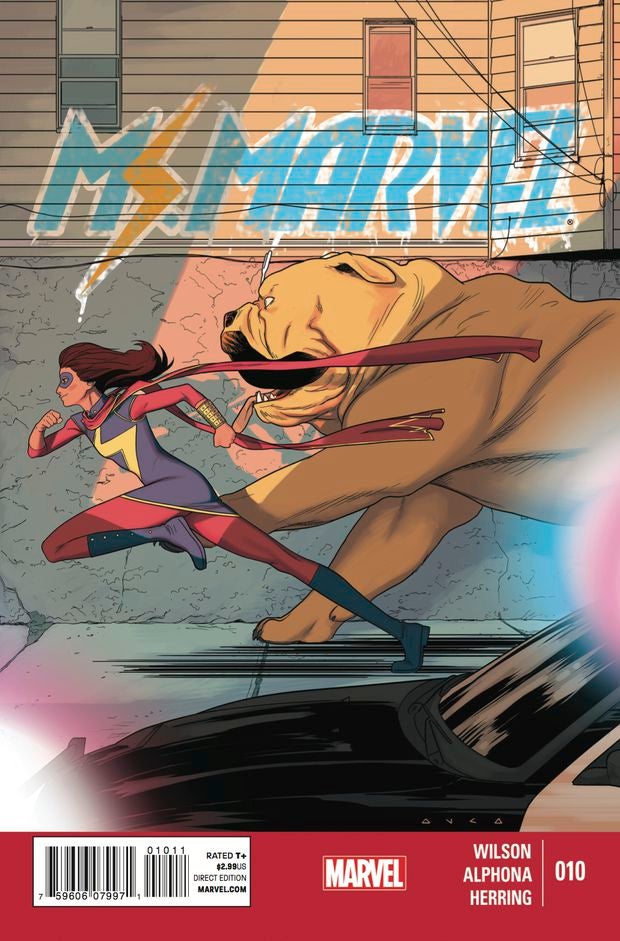 Teenagers are really dumb. As someone who is still not even a decade removed from his life as a teenager, I think I can say that with some degree of certainty. You do and think a lot of dumb things when you're sixteen. It's easy to dismiss teenagers, but that doesn't mean we should. Ms. Marvel #10 points out that teens, specifically millennials, are also kind of amazing.

Ms. Marvel has been so many things throughout the course of 2014: a funny high school dramedy, an energetic team-up book, a wildly imaginative (often surreal) romp, and a reinvigoration of the classic teen superhero genre. It's an agile, flexible concept that moves between these different tones and stories with ease, and it's here that all of those different elements and ideas converge. Everything from Wolverine's mentorship to Kamala's role at home to the introduction of Lockjaw is made to spin together for this climax of Ms. Marvel's battle with the Inventor. As much as I have appreciated the series thus far, I am still floored at how gracefully G. Willow Wilson draws together her various themes here. (Marvel Comics made a very good decision in signing her to an exclusive contract)

Alphona pulls all of these elements together in a seamless fashion as well. His characters highly expressive faces and forms lend themselves naturally to both the impact and speed of combat and emotive humor. They move between comedy and action without a single break in pacing. He capably navigates from the outrageous silliness of an evil bird clone in a pimp-bot (villain of the year) to a startling, saddening reversal of expectations in the first of two large action sequences.

Those two sequences are the culmination of Ms. Marvel's conflict with the Inventor. Alphona makes everything feel big, even bigger than a superhero, giant dog, and killer robot battling in the New Jersey Pine Barrens ought to feel. He sets up characters with power panels in which they are shown preparing to strike. These moments are composed to not only establish the momentum of the fight, but to emphasize the attitude and abilities of each individual. They make for an easily understood fight sequence, and one that naturally creates mounting drama and shocking reversals in that momentum.

It's a climactic battle, and one that draws out Wilson and Alphona's thesis for Ms. Marvel. Kamala is called upon to learn from her mistakes and experience in order to stand on her own and attempt to save the day. She's a dramatically more confident character than the one introduced in Ms. Marvel #1 and is defined by all of the adjectives in the above paragraphs and many more. Her heroism isn't derived from her powers or her being uniquely qualified, it's something both much more simple and complex. She lays it out plainly in this issue, "A hero is just somebody who tries to do the right thing even when it's hard."

Ms. Marvel #10 opens on a desperate situation that only gets worse. The teenagers she is tasked with rescuing have been brainwashed into believing they are useless and would be better off being made into batteries. Then the Inventor returns and reveals himself to be far more dangerous than ever before. Even when surrounded by teenagers convinced the world is doomed and a supervillain prepared to counter her every advantage, Kamala keeps fighting. Whether it's through impromptu oratory or enormous fisticuffs, she gives everything she has to fight back. It's not complicated because she makes it simple. The world is a difficult place filled with seemingly insurmountable challenges, but through the eyes of this sixteen year old girl that doesn't matter. She still tries.

That's what I mean when I say that teenagers are kind of amazing. It's not that they have solutions to all of the world's problems, but they have the energy and vitality to confront those problems and do so with an unassailable spirit of hope. Watching Kamala Khan stand up to the Inventor and for her entire generation in Ms. Marvel #10, it's impossible to not feel optimistic about what the future holds.

Ms. Marvel #10 is a Love Letter to Teenagers (and their dogs) (Review)