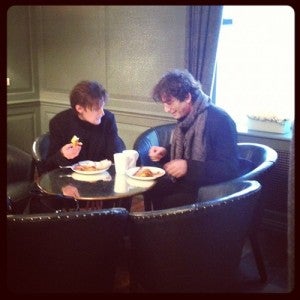 Comics superstar, bestselling author and occasional Doctor Who writer Neil Gaiman took to social media last night to share his thoughts on just who should and should not be cast in the role of the Twelfth Doctor, now that Matt Smith has announced he'll be leaving Doctor Who at the end of December.

His answer was thoughtful and a bit surprising, but also falls in line with what we've heard from many of the fans on our own social media pages and comment threads, so we thought we'd share it here.

"I think that if you’d asked me who should be the Eleventh Doctor five years ago I wouldn’t have listed Matt Smith, because I didn’t know who he was or what he was capable of, and if you’d asked me who should play Sherlock Holmes in a modern day revival around the same time I wouldn’t have said Benedict Cumberbatch, because I didn’t know who he was either," Gaiman wrote. "I actually like it when The Doctor is a relatively unknown actor, or one without one huge role that made them famous. A star, like Sir Ian, brings all the other roles they’ve ever played to the table when they act. Seeing John Hurt as the (Spoiler) at the end of the Name of the Doctor, meant that this was a certain type of part with a certain amount of gravitas, and you understood that John Hurt was bringing everything with it (including being John Hurt), just as Derek Jacobi did as the Master. But I like to see The Doctor as The Doctor, and an actor who doesn’t bring baggage is a grand sort of thing. A star waiting to happen. So I don’t want to see Helen Mirren or Sir Ian McKellen or Chiwetel Ejiofor, or any of the famous names people are suggesting.I want to see The Doctor. I want to be taken by surprise. I want to squint at a photo of the person online and go “but how can that be The Doctor?”. Then I want to be amazingly, delightedly, completely proven wrong, and, six episodes in, I want to wonder how I could have been so blind. Because this is the Doctor. Of course it is."

Neil Gaiman On Who Should Be The Next Doctor Who