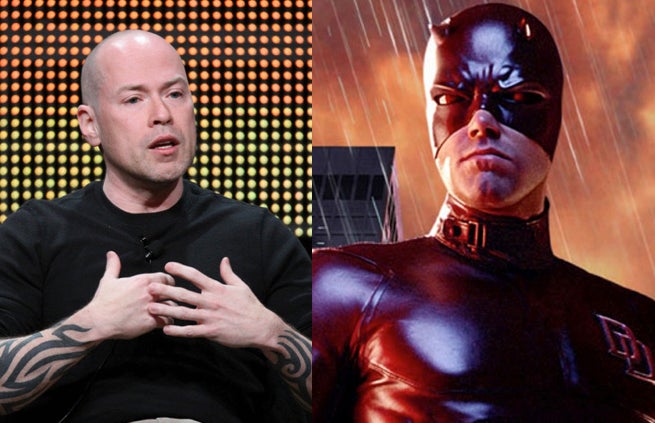 While many took issue with Ben Affleck’s turn as Matt Murdock in 2003’s Daredevil film, the current show runner for Netflix’s Daredevil series found the actor’s performance to be the least of the film’s problems.

While answering numerous fan questions about Netflix's Daredevil on Twitter, Steven DeKnight was inevitably asked to share his opinion of Ben Affleck. When questioned, “Ben Affleck reprising the role?” by one user, DeKnight responded with “Ben got a bad rap, in my opinion.”

Then, when another Twitter user joined the conversation by saying “Ben wasn’t the problem in the DD movie. He was all in,” DeKnight retweeted the message and added “Truth!” So, it safe to assume that DeKnight will have no problem seeing Affleck don another cowl when he plays Batman in Batman V. Superman: Dawn of Justice.

DeKnight answered a slew of other questions about the upcoming Daredevil series as well.

Regarding Daredevil’s levels of violence, DeKnight inferred that while the series certainly won’t pull its punches, it won’t be excessively violent either. The point came up when one user asked if Daredevil would be appropriate for a 10-year old. DeKnight wrote, “it’s PG-15ish, so dicey.” Then another user asked if there would be a lot of blood on Daredevil, to which DeKnight responded “Not like Spartacus,” referencing the ultra-bloody show on STARZ. Then when another user jumped in and asked if Daredevil would have “awesome fight scenes like Spartacus,” DeKnight said that Daredevil’s fights would be “very different, but cool.”

Deknight’s questioning wrapped up with a few general housekeeping questions, where he cryptically hinted that Stan Lee might make a cameo on the series. He also said that he didn’t know when the trailer would debut. One of the more interesting questions asked was if Daredevil would be set before or after the events of Avengers: Age of Ultron. DeKnight said he wasn’t allowed to reveal that information yet, suggesting that Marvel’s Netlfix series might make strides to heavily reflect the events of Marvel Studios' films.