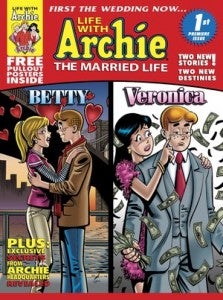 We've followed his exploits, loves, misadventures and basketball games for decades now, so it seems only logical that we would follow him into the realm of married bliss. Archie Comics has announced that a new series, Life With Archie-The Married Life, will take readers into the "what-if" lives of Archie if he had married Veronica or if he had married Betty, with two stories showing the possible scenarios that would occur from those unions. After the release of last year's Archie #600, which featured Archie on one knee proposing to Veronica, fans clamored for more. It was soon revealed that this was a sort of what-if of its own, with the story then changing to reflect life with Betty. This new series will step up the adult interaction between the grown-up versions of these beloved characters and explore the questions that readers have asked themselves for years about the Riverdale kids. While this new story will still be considered an all-ages type of comic, as all the other Archie comics and their spin-offs have been, but adult readers may get a kick out of seeing the direction that these stories could have taken! It will also be published in a magazine format that will be a new addition to this already new book. Look for it in stores in August of 2010!