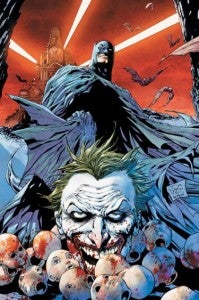 While cynical Superman and sword-wielding Wonder Woman might be causing a stir among some fans, the take on Batman in the new DC Universe is likely to prove much less controversial. The reason being is that the new Batman isn't undergoing a drastic personality change like some of his fellow superheroes. In fact, the new Batman is basically the same as the Batman of the popular Christopher Nolan movies. After the recent storyline of Dick Grayson replacing Bruce Wayne as Batman, fans are likely going to be relieved to see that Bruce Wayne is the one and only Batman of the new DC Universe. The first new Batman comic book to be released will actually be Detective Comics #1 this Wednesday. Of all the New 52, this first issue is of special note, because Batman didn't premiere until the twenty-seventh issue of the original Detective Comics. It will be nice to see Batman getting a chance to star in the first issue of the comic best known for his adventures. In an interview with USA Today, writer and artist Tony Daniel says Detective Comics will emphasize the detective side of Batman with a high-tech angle. Unlike the Dick Grayson version of Batman, which Daniel describes as superhero-y, he says this version will be dark, gritty, and intense. Daniel compares Detective Comics to CSI with serial killers and facial recognition software. While the new Batman sounds a lot like the old Batman, there is one big shake-up. The Batcave will be getting a makeover. Instead of a dinosaur and giant penny, fans should expect to see a dark cave with a couple of computers. With The Dark Knight Rises coming in Summer 2012, DC Comics appears to be playing it safe with Batman, which is likely a smart move. After all, you wouldn't want all the fans from the movie finding that Batman in the comic books has reverted to the campy sixties version.

New Batman To Be A High-Tech Detective