While I'm anything but a fan of the idea of a reboot of Judge Dredd on the silver screen (anything above crap for the film will be considered a 'success'), I have to say I'm a little more intrigued after the photos that appeared today.

First, the new 'Empire' magazine, which features a shot of Karl Urban as Judge Dredd. Looking like a badass, Urban's Dredd puts Stallone's version to shame.

The pic comes after the break. 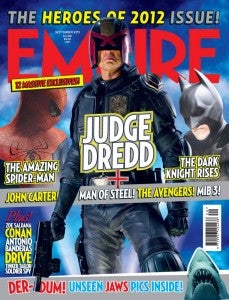 Superherohype scanned the photos from the magazine, and while we think they're pretty cool, we aren't going to publish those here out of respect to Empire. If you want to see them, click this link.