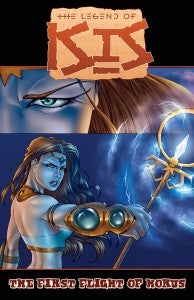 Celebrating the tenth anniversary of the story's first publication, Bluewater Productions today announced a new Legend of Isis series, Legend of Isis: Flight of Horus, is available starting today as a three-issue miniseries both digitally, and in print at Comics Flea Market.

The series features the Egyptian goddess Isis, who is trapped 5,000 years out of time. Isis must adjust to her new life in 21st century Los Angeles. Says the official synopsis, "Using her mystical staff and some help from a few new friends, Isis will protect those around her from evil that may threaten their world. But how can she protect a world that she doesn't fully understand?"

In 2013, Arcana will be launching a series of trade paperbacks of the previous series. Previous issues of Legend of Isis are now on sale at DriveThru comics till the end of the month.

The series saw its genesis ten years ago as part of the Image Introduces... line of one-shots. An attempt was made in 2004 to adapt it into a major motion picture from Paramount and writer Ali Russell.