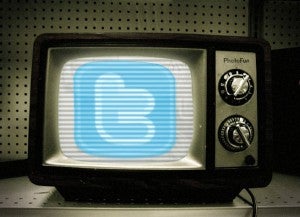 The shows that do well among the comic book and "geek" audience aren't always the ones that do well among the public at large, but the numbers are--as has been proven time and time again when it comes time for things like voting on the year's best show or the cover of a special TV Guide episode--bigger than they seem based on ratings.

Hardly a week goes by when the show is on the air, for example, that Community doesn't have at least one of their handful of catchphrases trending on Twitter. The Walking Dead always breaks the Internet in half when it has a big surprise episode, and even some series like Comic Book Men get more social media buzz than the ratings would suggest they should.

So when Twitter and Nielsen teamed up today to announce that next year's pilot season will be tracked by a new social media analytic, it bodes nothing but good things for these and other genre shows, whose fan bases may not own Nielsen boxes but certainly take to the Internet with enthusiasm.

“Our users love the shared experience of watching television while engaging with other viewers and show talent. Twitter has become the world's digital water cooler, where conversations about TV happen in real time. Nielsen is who the networks rely on to give better content to viewers and clearer results to marketers,” said Chloe Sladden, Twitter’s vice president of media. “This effort reflects Nielsen's foresight into the evolving nature of the TV viewing experience, and we’re looking forward to collaborating with Twitter ecosystem partners on this metric to help broadcasters and advertisers create truly social TV experiences.”

Nielsen has long been criticized for being slow to respond to increasingly important factors like DVR, re-runs on the Internet and even Hulu, which is ad supported and co-owned by a number of studios, when detemining TV ratings. It's not just bragging rights at stake--television is advertiser-supported, and barring a Chuck-style advertiser initiative, low-rated shows tend to have a harder time attracting audiences.

Among other things, collecting data on the social media conversations should give networks an additional tool in that arena; if you can prove that a show's arguably small fan base is also vocal and fiercely committed, it may be easier to convince the advertiser in question that they'll benefit from a relationship with that show. Indeed, following their successful relationship with NBC's Chuck, Subway restaurants have attached their brand to such low-rated cult favorites as Community and ABC's (now TBS's) Cougar Town.

“The proliferation of smartphones and tablets has generated a substantial ‘connected’ TV audience that is simultaneously watching television and accessing the Internet through these devices. This, in turn, will continue to create the opportunity for content providers like CBS to offer engaging interactive features for our viewers.  As this form of viewer engagement evolves into a mainstream activity, it presents ways for CBS to enhance the viewing experience for our viewers and our advertisers.  We are already engaged with Nielsen and Twitter in a program of research and experimentation in this exciting new area,” said David F. Poltrack, Chief Research Officer, CBS Corporation. “We are pleased to see Nielsen and Twitter join together to provide a comprehensive measurement system that will allow us to employ these social networking tools to their full advantage."

“Twitter is a powerful messenger and a lot of fun for fans of our shows, providing them with the opportunity to engage, connect and voice their opinions directly to each other and us,” said Peter Rice, Chairman and CEO, Fox Networks Group. "Combining the instant feedback of Twitter with Nielsen ratings will benefit us, program producers, and our advertising partners.”

New Ratings Metric Likely to Favor Some Of Our Favorite Shows