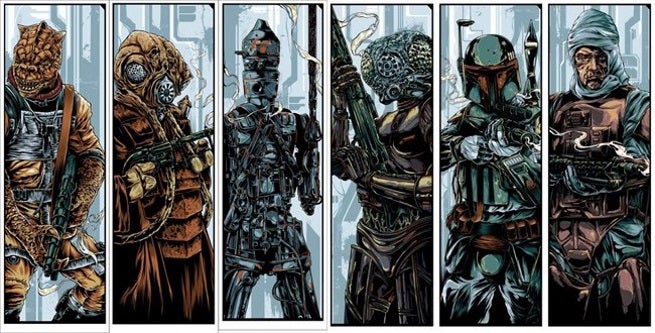 Slashfilm is reporting a rumor that Gareth Edwards’ Star Wars spinoff movie will be about a group of bounty hunters out to steal the plans for the original Death Star. The rumor is not confirmed, and was reportedly only spilled by a single source. Lucasfilm and Disney refused to comment on the matter, so remember that this is all tenuous rumors for a film in the early planning stages.

The rumor suggests that the film will tell the important story of how the Rebel Alliance came to possess the plans for the first Death Star. While most assumed it was Rebel agents who procured the plans, the opening crawl of A New Hope simply says the plans were stolen by “Rebel spies.” It’s possible that a small but wealthy organization like the Alliance would outsource this mission to freelancers. Unless these bounty hunters are all Bothans, it doesn’t explain the line in A New Hope about how “many Bothans” died to bring the Alliance said information, but that could be interwoven into the film (or remain one of many contradictions in Star Wars continuity).

The film itself would play out like a heist movie, with a Suicide Squad like group of bounty hunters working to steal the plans. Slashfilm could not confirm that Boba Fett would be part of this team, though there’s no particular reason why he wouldn’t fit in.

A more confusing aspect of the film is the rumored inclusion of the Millennium Falcon, alongside the rumored exclusion of Han Solo. The events of the spinoff would take place very close to the events of A New Hope, so it seems like Solo should be in possession of the Falcon, however the rumors indicate that the Falcon will play a role in the film, but that Solo will not. Either something here is incorrect, or we’re missing some key information.

Additionally, the film is said to feature a character who will be introduced in The Force Awakens. Given the long period of time between events taking place prior to A New Hope and the events that will transpire in The Force Awakens, the character would most likely have to be older, seemingly pointing to whoever it is Max Von Sydow is playing. This lines up with previous rumors that Von Sydow is playing a retired bounty hunter, and also would go a long way towards explaining why Disney has been so tight lipped about their plans for the spinoff films.

Again, this is all rumor. It likely has at least a grain of truth to it, but its also likely been jumbled up in the rumor mill. We’ll have to wait for more official information, or at least further confirmation, before we can really know anything for certain.