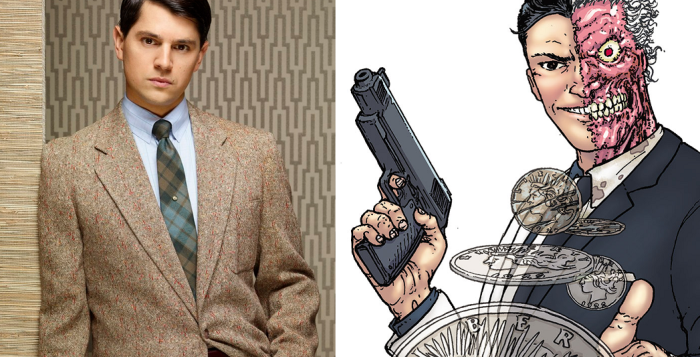 Gotham City gets its next major Bat-Villain-To-Be next week when Harvey Dent enters the world Fox's Gotham. Dent, who eventually becomes Two-Face, will enter the show a few steps shy of his iconic identity as a mere assistant to Gotham's district attorney.

Bringing "Harvey Two-Face" to life is actor Nicholas D'Agosto. In an interview with Entertainment Weekly, D'Agosto revealed that his take on the tortured prosecutor will posses traits both familiar and unique to Gotham. Though this Harvey Dent will still start his Gotham residency as an inspirational crusader, he will carry slightly darker undertones to him. D'Agosto explained that this will stem from Dent's abusive childhood, a facet of the character that Gotham will explore in-depth.

But Dent's villainous writing won't be entirely on the wall. D'Agosto insisted that the assistant DA will be established as a positive character that even Jim Gordon can support.

"But there's an ambition in his Harvey Dent, there's almost a craven ambition to him, and that can lead to his more angry episodes," D'Agosto explained. "It lends itself to a darker element to him that most people will know."

Not to feel completely foreign to viewers, Dent will still come with his signature coin. The actor promised that his Dent starts flipping the infamous coin in his very first scene, and hoped that he will use it as a manipulative tool like Aaron Eckhart's Dent did in The Dark Knight (See: "I make my own luck").

Given how much earlier Dent arrives Gotham's timeline than in the comics' or other media's, D'Agosto wasn't sure if he'd ever fully descend into Harvey darker half. But, like the rest of us, he's "hopeful."

Nicholas D'Agosto Outlines How Harvey Dent Will Be Different On Gotham