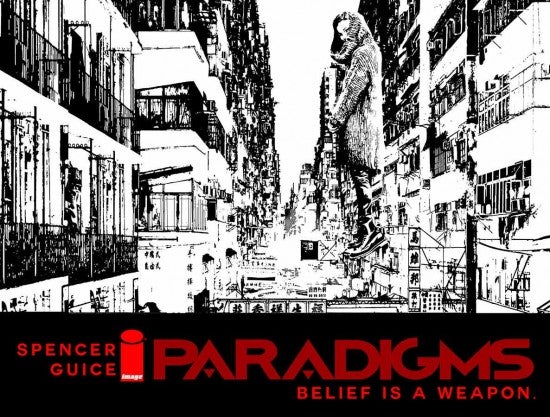 Today at Image Expo, arguably nobody was busier than Nick Spencer, who announced three new series to launch in 2014 with the publisher. Already writer of Image Comics's Morning Glories and Bedlam along with a bunch of work-for-hire titles at Marvel, Spencer nevertheless has time in his schedule for Great Beyond, Paradigms and Cerulean. Great Beyond features art by Change artist Morgan Jeske. Spencer  compares it to his series Infinite Vacation, saying it's about "a post-life environment where your status after death is dependent on your bank account during your life." 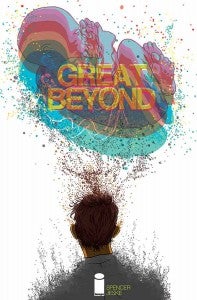 Next up was Paradigms with Butch Guice, with the tagline, "Belief Is a Weapon." The writer called it "slightly intimidating" to be working with an artist as accomplished as Guice, who has worked on titles like The Adventures of Superman and Captain America. The title is a fantasy story with a twist of "modern day spy thriller" and A Game of Thrones. The title is "kind of a mile-a-minute exploration of these clans that are subject to the approval of their gods," said Spencer. Cerulean rounds out Spencer's announcement, coming with help from artist Frazer Irving. The title will revolve around the last survivors of Earth, who upload their consciousnesses and travel to an inhabitable planet. "This will be my fifth year writing comics, and I'm a sucker for an anniversary," Spencer told the audience in San Francisco today. "I really wanted this year to make a statement about where things are headed." Some more details, via Image:

0commentsA contemporary fantasy epic with a spy thriller aesthetic, PARADIGMS will showcase art by Butch Guice (Captain America, Superman) and explore a world that exists beyond, or more specifically behind, ours. In the shadows where magic is real, warring clans of sorcerers battle for power and the favor of their gods. A sci-fi thriller of dead worlds, lost secrets, and hidden dangers, CERULEAN, with art by Frazer Irving (MORNING GLORIES, BEDLAM, Batman), follows the last survivors of the destruction of Earth as they struggle to rebuild civilization on a distant planet full of its own mysteries. In the GREAT BEYOND, featuring art by Morgan Jeske (ZERO, SEX) a "post-life community" values the size of your bank account over morals and values—and your place in the hereafter is determined by it. But then polite society is rocked by the apparent suicide of one of its own."I knew I wanted 2014 to be a big year for my creator-owned work, but I never dreamed I'd get the opportunity to work with so many incredible artists! Collaborating with a legend like Butch, a visionary like Frazer, or an exciting new star like Morgan, it just makes you want to tell great stories with them and do the best work you possibly can. And it's always great to be doing it at Image, which has been like home to me the entirety of my career. I really believe in what we're doing here, and I can't wait for people to see what's next."

No specific dates are yet available as to when the three titles will launch.