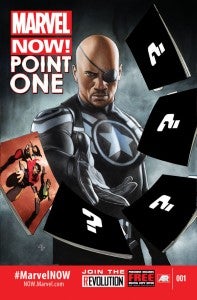 Okay, so let's get one thing straight: The items being thrown at the reader by Nick Fury, Jr. are apparently NOT cards, as they were in The Avengers. No, they're actually files that S.H.I.E.L.D. keeps on superhumans, appaerently, as Graeme McMillain pointed out to me last night via Twitter that they've got tabs and paperclips on them that suggest file folders. He suggested that either Nick Fury is enormous or he's got very small files, so we're going to go ahead and assume that S.H.I.E.L.D. either has access to Pym's size-altering hardware, or that the artist was originally instructed to make it cards and that Marvel at some point changed their mind on that. In any case, today's teaser reveals Kid Loki, Miss America Chavez and Wiccan who appear in this newest teaser, suggesting that those characters may be at the center of one of the relaunched Marvel NOW! titles. In any case, Marvel NOW! Point One comes out in October and is written and drawn by a slew of people, so it's likely a teaser for a bunch of differrent series as opposed to  one long story written and drawn by a dozen or more creators. We'll see soon enough. Check back tomorrow to find out whose file is the last one revealed.

Where Monsters Lie #1 Review: The HOA from Hell Arrives at Dark Horse Comics