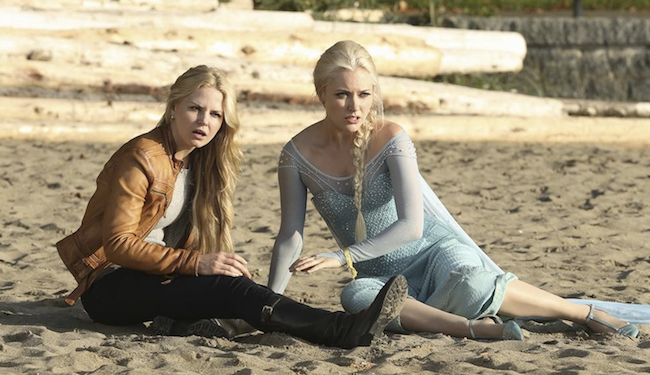 After the previous two-part special, episode nine of the Once Upon A Time's fourth season, "Fall," opens with Rumplestiltskin (Robert Carlyle) meeting the Snow Queen (Elizabeth Mitchell) in the woods, ready to make a deal. The spell of Shattered Sight is going to hit at sundown, pitting all of the Storybrooke residents against each other, except for Elsa (Georgina Haig) and Emma (Jennifer Morrison) – and Rumple. He threatens to make the Snow Queen's life Hell for eternity if she doesn't let him leave, with Belle and Henry in tow.

The rest of the characters wait in the clock tower and watch the spell spread through binoculars. Emma proposes that the only way to escape its effects is to leave town, so they all make their way to the ice wall. David (Josh Dallas) smacks it with a pick axe, only for its magic to send him backward. It does produce a crack in the snow, however, out of which Elsa pulls Anna's snowflake necklace. They split up with different attack strategies.

At the pawnshop, Belle (Emilie de Ravin) tells Emma and Elsa that there may be a way to undo the spell, once it covers the town. With a piece of an infected person (like a hair), you can make a vaccine. Belle confirms that Anna was under the spell, and with her necklace, they may be able to make an antidote to the curse.

In Arendelle, Anna (Elizabeth Lail) and Kristoff (Scott Michael Foster) unfreeze to find that the urn containing Elsa is gone. Anna finds a gold straw, pointing them to Rumple, but before long, Hans (Tyler Jacob Moore) enters and puts them under arrest for treason as the new King of Arendelle. Anna and Kristoff fight off Hans' men with sword and hammer, and run.

They make their way to the woods, where Anna tells Kristoff what she learned in her mothers' notes. The King and Queen were on their way to a "wishing star," which they obviously didn't' reach. Additionally, they were going to meet with Blackbeard the Pirate. Anna suggests that they go to Blackbeard, use their heaps of royal cash to pay him for the wishing star, and use the star to locate the urn with Elsa.

Killian (Colin O'Donoghue) and Rumple head to the coast to see if they can all escape Storybrooke via boat, but the spell is coming from the ocean too. Rumple proposes they track down fairies, use their powers to make the Sorcerer's hat even more powerful, and then use the hat to cleave Rumple from the dagger. Once freed, he can escape. Since he has Killian's heart, Killian cannot refuse to help. Using up the fairies' magic for the hat will rid them unable to make an antidote for the spell, but Rumple doesn't care.

Regina goes to Robin (Sean Maguire) to tell him and his men about the spell. She knows that he's one of the only citizens of Storybrooke that truly believes in her, and it breaks her heart to imagine how he would think of her if infected by the spell. 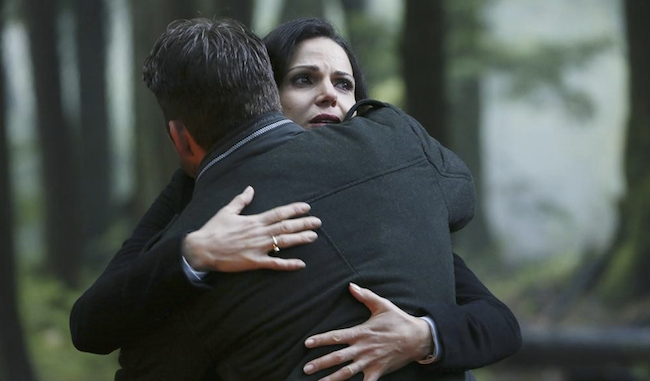 Emma and Elsa bewitch Anna's necklace so that it will lead them to Anna. They're quickly led to the library, which has tons of magic tunnels beneath. The duo explores the mines until they reach a wall – right where the necklace is going wild.

Back in Arendelle, Anna and Kristoff have made it to Blackbeard's ship, the Jolly Roger. They tell him (Charles Mesure) that they want to buy the wishing star, and he offers it for his weight in gold. Anna offers it willingly, before they realize that Hans has made it to Blackbeard first. As they're being arrested,

Blackbeard reveals that he did meet Anna's parents, who he claims did have the wishing star, adding that only "those with pure hearts" can use it Hans has much more money than Anna, and he has bought an additional wishing star from Blackbeard. He tells Anna and Kristoff that their next destination is death.

Emma and Elsa meet with Leroy (Lee Arenberg) over plans to clear the underground passage, but it will take days. David appears with a message from Belle: The fairies definitely can make an antidote from Anna's necklace, but the necklace will be destroyed. They would be unable to find Anna afterwards. Regina believes that – if it's the difference between saving the whole town or just saving Anna – they should save the town. The Charmings agree, and Emma gives Elsa the news. She leaves wordlessly, taking the necklace with her.

Rumple meets with Belle and the fairies and says that he'd just like to hang around, perhaps learning something new about light magic. Meanwhile, Killian creeps around the corner, Sorcerer's Hat at the ready. Emma and the rest of the group meet the fairies thinking they have the necklace, but since Elsa tricked them, there's no way to make an antidote. Emma and David decide to descend into the mines, find Elsa, and help her find Anna.

They find Elsa attempting to knock down the wall with magic, despite the avalanche or two that she's caused in the past. Fortunately, the wall goes down smoothly, opening a passage to a beach. The necklace continues to glow, though Anna is nowhere to be found. Emma begs Elsa to bring the necklace back to Belle and the fairies.

On the Jolly Roger, Hans taunts Anna and Kristoff, proposing that perhaps their bones will mingle with her mother's at the bottom of the sea. While Hans rambles, Anna realizes that thirty years have passed while they were frozen. She thinks out loud that maybe Elsa has escaped the urn by now, but before she can formulate a plan, they are thrown into the sea.

Back on the beach, just as Anna and Kristoff are thrown to their deaths – Anna's necklace stops shining. The couple is shown shouting for help in the chest as it slowly fills with water. Elsa begins to mourn Anna on the beach, but Emma pushes her to move forward as the curse moves onward. Kristoff pulls his hands from the ropes binding them just as the water is reaching their necks. 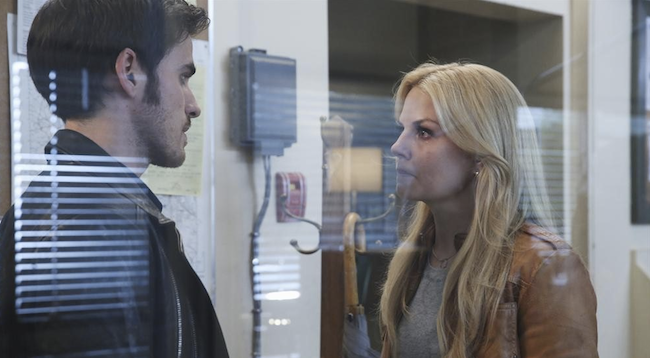 Believing they are about to die, Anna begins to recite her wedding vows to Kristoff. He insists that she cannot marry him until they escape, demanding that she be brave. Elsa clutches the necklace to her chest and says out loud that she wishes Anna was with her. Suddenly, the necklace lights up again. Anna and Kristoff clasp hands and express their love for each other, accepting their fate, just as they are blown out of the water and onto the shore.

They climb out of the chest to find Elsa and Emma. As Anna and Elsa greet each other after so many years, Emma wonders if Elsa's "wishing" saved Anna and Kristoff. Nearby, a bottle rises to the surface of the water – the bottle that Anna and Elsa's mother threw into the sea before she perished in the storm.

Rumple tells Belle to wait at home and stay safe, while he makes some kind of protection spell for her. He promises her that she'll be fine, but does not share the true details of his plan. Killian meets back with Rumple, asking if he can finally have control of his own heart again. Rumple says everything will be over by morning, including Killian's life.

Anna, Kristoff, Elsa, and Emma meet up with Mary Margaret, David, and baby Neal. Since the Charmings (sans Emma) aren't immune to the spell, they decide to lock themselves in a cell to keep the others safe once the spell hits, giving Emma Neal and the key. In a teary farewell, they tell her that they know she has the ability to save them all. Killian appears and asks for a word with Emma alone. He tells her that he just needed to see her one more time before he chained himself away for safety. They share a goodbye kiss, as the group watches the spell through the window getting closer.

Elsewhere, Regina tells Henry (Jared Gilmore) that she had to put their survival before the plan to find the author of the Story Book. She explains that she is going to bewitch their home, where he is to stay, safe from everyone. He bravely tells her to go before time runs out, and they say their "I love you's." Robin is outside waiting, so Regina tells him to get away somewhere safe while she seals herself in a vault. He says he is not afraid of her, but she says he should be.

All of the Storybrooke citizens are locked away in respective homes, vaults and cells, except for Emma, Elsa, Anna, Kristoff, and Rumple. The curse slowly washes over them, with bits of sparkly, snowy glass in the air. It enters their faces, freezing over their eyeballs, and turning them against each other.

Once Upon A Time Season 4 Episode 9 Recap With Spoilers: Fall