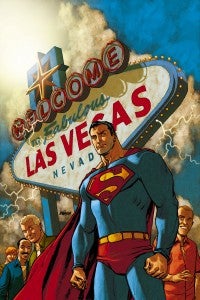 On the last episode, there was a bit of discussion surrounding Before Watchmen and my ambivalence about the project. It's still hard for me to see DC or Alan Moore as villains in the overall narrative, but rather easy to see them as the heroes of their own versions of the story, and given the passions running deep on either side of the issue that seemed like a simplistic approach for a lover of comics to take. Chris Roberson, a very talented creator with whom I've become friendly via Twitter, not only has strong feelings about the importance of creator ownership of their work but is also personally acquainted with Watchmen writer Alan Moore (who, for the uninitiated, is the member of the original creative team most vocally opposed to a follow-up). We caught up with Roberson this week to talk about his creator-owned IDW book Memorial (you can read my review of the first two issues here), Before Watchmen and the state of art and business in the comics industry. While Roberson had identified his recent issues as having been "off the reservation," he is in fact well-spoken and calm about the issues, even if he's passionate in his opinions. it's safe to say that nothing was said in this interview that wasn't already exceeded in terms of anger and controversy by Image Comics publisher Eric Stephenson, who called the project "disgusting" in his initial comments to Newsarama. Says Roberson, "When I was an angry young firebrand in my twenties, I was completely opposed to work-for-hire and I felt that creator-owned was the only way to go. As I appproached the end of my thirties and entered my forties, I was given the opportunity to work on a few work-for-hire projects using franchises that had mattered a lot to me as a kid. I just couldn't turn them down because I got a chance to work on these things that I'd loved for so long--but if anything, that just validated what I'd thought years before."

Listen to this week's episode here!

There is a bit of an echo problem, only on my end, for the last twenty or so minutes of the interview. I minimized it as best I could, but when you download the show it's a known issue and not specific to you. Please also excuse any sinus-infection-related sounds you hear, which should also be minimal but are almost certainly there. You can follow Chris Roberson on Twitter or check out IDW's Memorial landing page. Chris also writes iZombie for Vertigo with co-creator Mike Allred. This week we welcome our new sponsor, Single Bound Studios, to the program. Single Bound is a great place to get your old comics bound, so if you've got a favorite story that never made it into trade, you should check out their website and consider them as a great option to get that old favorite up on a shelf with the rest of your hardcovers or trade paperbacks. This week's opening music is a clip from Bruce Springsteen's "Easy Money." Made available just this morning on the Backstreets Magazine website, the track is from Springsteen's forthcoming album, Wrecking Ball, which streets on March 6 and can be preordered just about everywhere now.