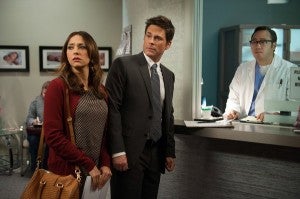 Be careful when you wander off into space; when you get back, your friends might not be waiting for you. That's the lesson for Chris Pratt, who plays Star-Lord in Guardians of the Galaxy, as today the TV world is reeling from news that Rashida Jones and Rob Lowe, who play Chris Traeger and Ann Perkins on Pratt's NBC series Parks and Recreation, will be leaving the cult hit. Jones, who wrote a comic book miniseries titled Frenemy of the State and is in the process of trying to adapt it to film, will likely end up riding off into the sunset with Lowe's character; the pair dated in season three and have recently got back together (kind of). Both characters will leave midway through the next season. Jones was one of the show's original cast members, but Lowe joined in the second season; both of them have a history of leaving hit shows; Jones left The Office to help launch Parks and Recreation, while Lowe left both The West Wing and Brothers and Sisters during their runs in spite of playing a key role in both shows. Parks and Recreation launches its sixth season on September 26 with an hour-long premiere that features guest stars Heidi Klum, Henry Winkler and Lucy Lawless.