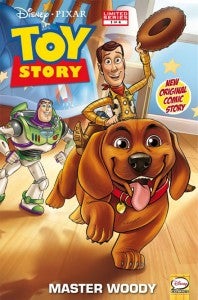 A few months ago, a number of comics industry professionals started to circulate a list of Pixar's "22 rules of storytelling" on Twitter. It's making the rounds again, albeit somewhat less aggressively, in the last little while, hot on the heels of Joss Whedon's 10 writing tips, constructed in 2009 but again...something that seems to come back around every so often when someone discovers it for the first time and then injects it into the unpredictable flow of Internet conversation. What do each have to say? Well, let's check 'em out, then have a little fun comparing. (And remember, folks, Whedon did some work on Toy Story, so there's an entirely good chance that some of his stuff comes straight from the Pixar playbook and people he met and spoke to there who helped shape his philosophy--or vice-versa.) Joss Whedon's Top 10 Writing Tips

Of course, Whedon is an extremely successful screenwriter and filmmaker, but his experiences are his own, and he's had both successes and failures using that philosophy. Pixar, on the other hand, have had one or two missteps buried in an ocean of the most successful animated films of the last 30 years. What have their people got to say about it? Well, from the Twitter account of storyboard artist Emma Coats...

#1: You admire a character for trying more than for their successes. #2: You gotta keep in mind what's interesting to you as an audience, not what's fun to do as a writer. They can be v. different. #3: Trying for theme is important, but you won't see what the story is actually about til you're at the end of it. Now rewrite. #4: Once upon a time there was ___. Every day, ___. One day ___. Because of that, ___. Because of that, ___. Until finally ___. #5: Simplify. Focus. Combine characters. Hop over detours. You'll feel like you're losing valuable stuff but it sets you free. #6: What is your character good at, comfortable with? Throw the polar opposite at them. Challenge them. How do they deal? #7: Come up with your ending before you figure out your middle. Seriously. Endings are hard, get yours working up front. #8: Finish your story, let go even if it's not perfect. In an ideal world you have both, but move on. Do better next time. #9: When you're stuck, make a list of what WOULDN'T happen next. Lots of times the material to get you unstuck will show up. #10: Pull apart the stories you like. What you like in them is a part of you; you've got to recognize it before you can use it. #11: Putting it on paper lets you start fixing it. If it stays in your head, a perfect idea, you'll never share it with anyone. #12: Discount the 1st thing that comes to mind. And the 2nd, 3rd, 4th, 5th – get the obvious out of the way. Surprise yourself. #13: Give your characters opinions. Passive/malleable might seem likable to you as you write, but it's poison to the audience. #14: Why must you tell THIS story? What's the belief burning within you that your story feeds off of? That's the heart of it. #15: If you were your character, in this situation, how would you feel? Honesty lends credibility to unbelievable situations. #16: What are the stakes? Give us reason to root for the character. What happens if they don't succeed? Stack the odds against. #17: No work is ever wasted. If it's not working, let go and move on - it'll come back around to be useful later. #18: You have to know yourself: the difference between doing your best & fussing. Story is testing, not refining. #19: Coincidences to get characters into trouble are great; coincidences to get them out of it are cheating. #20: Exercise: take the building blocks of a movie you dislike. How d'you rearrange them into what you DO like? #21: You gotta identify with your situation/characters, can't just write 'cool'. What would make YOU act that way? #22: What's the essence of your story? Most economical telling of it? If you know that, you can build out from there.

There are some obvious similarities here; "the most economical telling of" your story gels nicely with Whedon's advice to cut your favorite bits if they're not working or necessary, for example; so does the #5 rule on Pixar's list, about how sometimes you think you're losing something valuable, but it's "freeing." That's particularly interesting in that Whedon uses almost the same phraseology, saying that making those cuts is "an enormously freeing exercise." Pixar's #2 about being in the head space of an audience member is pretty much the same thing Whedon is getting at with his #7 rule. It's also interesting because it runs counter to so much of what you hear from the famous auteurs of the day; a lot of guys will tell you that you can't talk down to the audience, and have to assume that they're with you on what you're doing, otherwise you're going to make a crap movie. There's certainly a kernel of truth there, in that you don't want to be constantly spoon-feeding your audience information that should be obvious...but Whedon's #2, on the other hand, gives the slower audience members all they need to know to understand Pixar's #4. Pixar basically posits that if your story is too complex to be put into an easy-to-understand structure, then you're probably doing it wrong. That might not be true all the time (see also: David Lynch), but it certainly tends to be true for major tentpole films that hope to make hundreds of millions of dollars. And of course, Pixar's point about having an ending early in your story's development is well-taken for Whedon's top bullet point. It helps you to know when to shut up. For example -- fin.