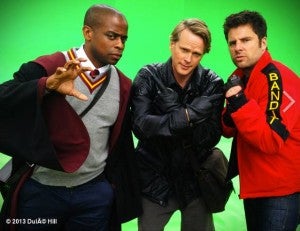 The hit USA dramedy Psych is expected to end its run at the close of next year's season, but before they do their small episode order has been increased by two. Back in April, though, five new scripts were ordered on top of the eight episodes already committed to be filmed. So--why are we getting only ten episodes? One reason might be that they want to keep the number of episodes without Maggie Lawson down. The series's female lead had a pilot picked up for the fall and contractually can only appear in five episodes of Psych. Another could be keeping a comfortable distance between Psych and Monk, the current record-holder for the most-ever episodes on USA. The smash hit kicked off USA programming as we know it today, and rumors have had it that there's a resistance at the network to let a show go on longer than Monk did (125 episodes). A ten-episode order would bring Psych to 122 episodes, whereas the rumored 13-episode order would have been eight episodes without Lawson, totaling 125. Or it could simply be that not all of the episodes were up to snuff. At present, there is one of those five they've committed to making, and another that will be decided by the fans from three choices. Voting begins tomorrow. Those three choices--you can read the blurbs below--mean that at least one of the five ordered scripts is still unaccounted for.

Telethon – In a classic "whodunit?" case with a PSYCH twist, Shawn and Gus investigate a murder that Shawn is convinced was committed by the beloved host of Santa Barbara's annual Children's Hospital Telethon. There's only one problem – the host was seen by hundreds of thousands of people on live television during the exact time the murder occurred elsewhere. Can Shawn steal the show, poke a hole in this rock-solid alibi, and prove the host did it? Or will Shawn fail in front of his biggest audience yet? Dream Therapy – From acclaimed director James Roday ("Mr. Yin Presents…", "Heeeeere's Lassie"), comes a new vision in terror: "Nightmare on State Street!" In the episode, an exhausted Gus enters dream therapy to understand the cause of his recent night terrors. But after this, nothing is ever again what it seems… He soon realizes that in dreams, no one can hear you scream! Food Truck – When the well-known owner of a beloved Santa Barbara food truck is mysteriously murdered, Shawn and Gus, fans of delicious flavor, are determined to solve the crime as only they can. They go undercover as proprietors of the PSYCH Naptime Food Truck, and soon discover that the high-profit world of Santa Barbara's mobile food business is cutthroat, insular and a place of many secrets – many of them worth killing for.

The winner of the voting will be announced at Psych's Comic-Con panel on July 18, where series star James Roday will appear along with Dulé Hill, Corbin Bernsen, Lawson and Timothy Omundson, along with Kirsten Nelson.

Psych Gets Two More Episodes--One You Can Vote For