In the first major departure from the original (which starred one of the show's various "young Shawn" actors, appearing in a flashback scene with Corbin Bernsen's Henry Spencer), the episode starts with Henry explaining to Shawn how to read a jury. Here, though, young Shawn is an infant in a carrier. Cut to the present day, 2006 (they reiterate this a few times), where Shawn and Gus are at the courthouse to get Shawn's motorcycle out of impound, while discussing the shortcomings of then-recent remakes of The Bad News Bears and Dukes of Hazzard. The idea of a remake, they say, is to take something that showed promise but failed to live up to expectations and improve upon it. In the courthouse lobby, they see a woman sitting on a bench. She's pretty and attracts Shawn's attention; they flirt with her a bit and then get directions from her to the ticket payment window before a man comes up to her and takes her away. In remake trivia news: Actress Lindsay Sloane, who plays the damsel in distress here, is one of a handful of previous Psych guest stars to pop up in the remake episode. She also appeared in the How I Met Your Mother episode "Double Date," in which she and Ted inadvertently duplicate a blind date they had years before, because neither is memorable enough for the other to see that it's happening until halfway through. Being given directions to the payment window didn't make Shawn actually pay his tickets, though; the line was too long, and the next thing we know, the boys are back at the Psych office watching TV. The morning news program they're watching tells the story of their former weatherman, who was killed recently--and then they cut to the trial, where the girl from the hallway is accused of stabbing the weatherman to death. After seeing how incapable her attorney is on TV, Shawn and Gus head to the courthouse, burst in and announce that they're there to work as consultants for the defense. 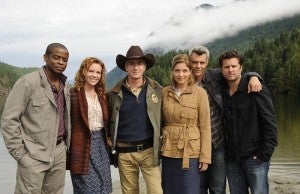 Fun fact: the murder victim in the episode is Dana Ashbrook from Twin Peaks. In that series, he played the boyfriend of murder victim Laura Palmer, whose father Leland was played by Ray Wise--the judge in Psych's remake trial. His name? Judge Leland. Both of these actors previously appeared in "Dual Spires," the show's Twin Peaks homage episode. After a brief recess so that the attorney for the defense can figure out what the heck is going on, the trial resumes and Shawn and Gus prove useful, if annoying. The helpless attorney is pleased to find out they're working pro bono to prove the pretty girl didn't do it--Lassiter and Juliet are less pleased, as they're the ones who made the arrest. The pair go on the morning show they'd just seen that morning, where they have a puff conversation on-camera followed by a tense one off when Shawn quickly figures out that the husband-wife anchors are on the rocks. They're then taken to the scene of the murder (in front of the weather map's green screen) by an intern. After that, they tour the offices briefly and decide that "roving reporter" Ruben Leonard, who does human interest pieces, is their top suspect.

Cut to the courtroom, where Shawn's and the defense attorney's antics drive Leonard up the wall to the point where he throws a tantrum that ends with this claim that Hale should have been stabbed a long time ago. Shawn doesn't really believe that Leonard is the killer, necessarily, but is helping to cultivate reasonable doubt--and that's a pretty respectable start. The pair head back to the TV station, where they search Leonard's office and find the murder weapon hidden in the ceiling tiles. Faking a psychic vision, they bring Lassiter and O'Hara back with them and reveal it to the cops. They head to the green screen, where Leonard is struggling through the forecast, sweating and stammering. When he sees the police there, he has a minor meltdown, saying that neither he nor the suspect killed Jackson Hale--but he'll tell you who did... ...then he collapses. After the body is carried away, the pair decide that maybe it's worth taking a look at the one woman Hale didn't have sex with--a mousy woman who had been guiding Shawn and Gus's tour. They bring her to the courtroom and break her down, where on the stand she admits that she was obsessed with Jackson...but Woody Strode (who will later become the county coroner and a recurring character) took her home instead and, per new evidence presented right at that moment, Sandra Panich (the defendant) went back to the studio to have sex in front of the green screen with Hale, who disappeared out of frame of the security cameras with her and shortly thereafter made a series of unpleasant noises like he was dying). 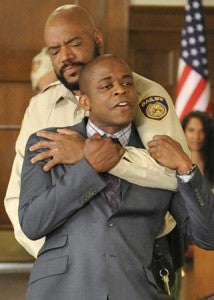 The court goes into recess and Shawn and Gus head back to the Psych office to examine the videotape for a clue as to what happened. When there's no luck, Shawn sends Gus ahead to stall the trial, but the judge's patience is short. A highlight of the defense is when Gus tries to invoke My Cousin Vinny, and the prosecuting attorney (played here by My Cousin Vinny star Ralph Macchio) dismissing the film as "okay at best." After they stall for long enough for Shawn to arrive (including Gus being escorted out of the courtroom by bailiff Ed Lover), he shows up and calls the husband of the husband-wife anchor team to the stand, and proves that the wife was sleeping with Jackson Hale. Shawn shows the video again, this time proving that the host appears in the green screen suit--but during the stabbing spree, the suit is torn around the killer's pinky, and a ring on that finger can be seen on the video floating, seemingly dismembered, against the background. After applause and hugs follow the trial, the defense attorney follows them back to the Psych office to bring back a tie he borrowed from Gus, and asks Shawn for permission to ask Juliet out on a date. Shawn tells him to go ahead, but then tells Gus it will never happen.

Psych Recap With Spoilers: Remake, AKA Cloudy...With a Chance of Improvement