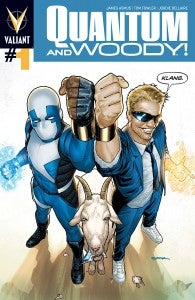 During an interview that ran yesterday, incoming Quantum & Woody writer James Asmus told Newsarama that the rebooted Quantum and Woody in the new Valiant universe will not be childhood best friends, as they were in Christopher Priest and M.D. Bright's original take on the characters. Instead, they'll be adoptive brothers. "I'm trying to streamline the logistics of their original relationship," Asmus said. "In ours, Woody comes into the family as a foster child. He's taken in, in his adolescence, by Eric's father. It's basically, for me, a cleaner, I think more relatable way of understanding and seeding how they've always kind of been stuck with each other, but there is a real kind of bond and [mutual] emotional responsibility." He said that he's chosen not to be intimidated by Priest and Bright's legacy on the series, which carried through to earlier this week when some fans were immediately upset that the original creators weren't brought back to work on the relaunched title. Neither Priest nor Bright have yet said anything publicly about the series, but Asmus in other interviews has seemed to imply that Priest is not unhappy with the new direction. "The overwhelming response I'm seeing is very positive, very supportive, mostly people who are just excited to get new comics featuring these characters," Asmus said. "Obviously, there have been a few comments from people who are cautiously optimistic, and even some folks who just won't give me the time of day by virtue of me not being Christopher Priest. For those people, there's nothing I can do, other than what I was already planning," Asmus continued, "which is just try and knock this book out of the park as much as I can, and hopefully they'll be able to just be excited for what it is."

Quantum and Woody Will Be Adopted Brothers in Reboot