Not long after DC Comics gives Lois Lane her first in-continuity one-shot in years, Valiant Entertainment are giving another much-loved supporting character a chance to shine...

Part of a line of zero issues from all-star creators, Vincent Van Goat will get his own one-shot in March, co-written by James Asmus and artist Tom Fowler. It's part of a second wave of zero issues, including Archer & Armstrong: Archer, Bloodshot and the H.A.R.D. Corps and Harbinger: Bleeding Monk.

Check out the cover and solicitation text below. 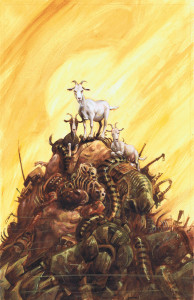 Are heroes born or are they bred? Who – or what – spawned the powerhouse of animal husbandry known simply as Vincent Van Goat?

Quantum & Woody's Goat Gets a Zero Issue at Valiant