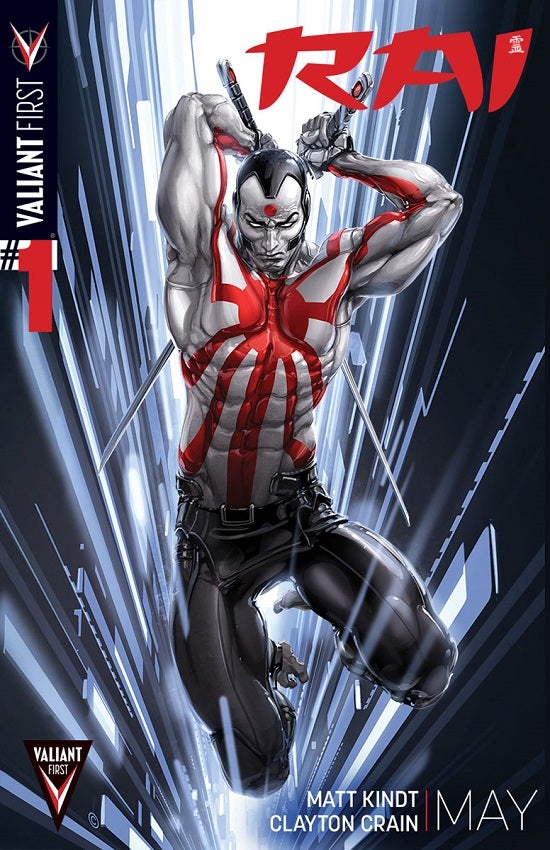 Matt Kindt will launch a new, ongoing series for Valiant Comics featuring Rai, the publisher announced this morning, spinning out of the events of Eternal Warrior's current "Eternal Emperor" arc set in the far-flung future of Valiant's 4001 A.D. Released as part of the publisher's Valiant First initiative, Kindt will be joined by artist Clayton Crain, providing fully-painted interiors to tell a story in which Japan is a single endless city-state, governed by a benevolent artificial intelligence and policed by an army of just one – the mysterious Rai, spirit guardian of the rising sun. But, soon, a single bullet will shatter the peace it has taken 2,000 years to secure. "The Valiant First line-up was very specifically chosen, and will continue our 'slow and steady' approach to growth. You won't see Valiant putting out more than nine core titles a month in 2014. We're focused on quality over quantity, and we'll be working hard to make sure that every Valiant First book is as good as anything else in the industry. You only have to look at the first wave of Valiant First titles to see that commitment – books like RAI #1 and Armor Hunters #1 are going to state our ambition with a vengeance," said Valiant Publisher Fred Pierce. In the '90s, the original Valiant told the stories of six different warriors who assumed the name and identity of Rai. Whether the current incarnation will be one of those, or someone new (as they did with Geomancer in Archer & Armstrong) remains to be seen.

Rai Relaunch Coming from Valiant Comics, Matt Kindt and Clayton Crain in May